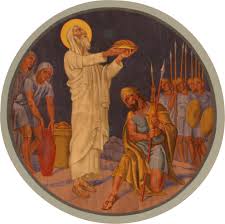 1/ Reading I: NAB Hebrews 7:1 This “Melchizedek, king of Salem and priest of God Most High,” “met Abraham as he returned from his defeat of the kings” and “blessed him.” 2 And Abraham apportioned to him “a tenth of everything.” His name first means righteous king, and he was also “king of Salem,” that is, king of peace. Without father, mother, or ancestry, without beginning of days or end of life, thus made to resemble the Son of God, he remains a priest forever. 15 It is even more obvious if another priest is raised up after the likeness of Melchizedek, 16 who has become so, not by a law expressed in a commandment concerning physical descent but by the power of a life that cannot be destroyed. 17 For it is testified: “You are a priest forever according to the order of Melchizedek.”

2/ Gospel: NAB Mark 3:1 Again he entered the synagogue. There was a man there who had a withered hand. 2 They watched him closely to see if he would cure him on the sabbath so that they might accuse him. 3 He said to the man with the withered hand, “Come up here before us.” 4 Then he said to them, “Is it lawful to do good on the sabbath rather than to do evil, to save life rather than to destroy it?” But they remained silent. 5 Looking around at them with anger and grieved at their hardness of heart, he said to the man, “Stretch out your hand.” He stretched it out and his hand was restored. 6 The Pharisees went out and immediately took counsel with the Herodians against him to put him to death.

I. THEME: Christ is the High Priest according to the order of Melchizedek.

Religion exists to bring people to God. In order to do this, people need to keep the law. As long as people keep God’s law, they have a good relationship with God. But people couldn’t have it because they sinned. Out of love for people, God offered a temporal solution which is to offer a sin offering to reconnect their relationship with God. This is the reason for the existing of priests and all the laws of offering. According to Latin, the word used for priest is “pontifex,” meaning the one who builds a bridge over a river to connect between the two points. A priest is the person who builds a bridge to connect between God and people by offering sacrifices. According to Jewish tradition, sacrifices can only compensate for unintentional sins; no sacrifice can compensate for intentional sins. The author of the Letter to the Hebrews recognized the incompletion of the priesthood and the sacrifices of Judaism. He thought that people need a higher order of priesthood than the priesthood of Aaron and a sacrifice higher than the blood of animals in order for all human sins to be forgiven and to provide a safe way for people to reconnect their relationship with God after sinning.

In the first reading, he used Psalm 110:4 and Genesis 14:18-20 to prove that Christ is the priest according to the order of Melchizedek. This order is higher than Aaron’s order, because “Without father, mother, or ancestry, without beginning of days or end of life, thus made to resemble the Son of God, he remains a priest forever.” In the Gospel, Jesus was angry because the Pharisees were so stubborn; while he healed people from their sins and sickness, they always find ways to accuse and to condemn him.

1/ Reading I: Christ is the priest forever according to the order of Melchizedek.

1.1/ The priest Melchizedek: When searching for the name “Melchizedek,” the author of the Letter to the Hebrews found a passage in Genesis, described him as follows: “Melchizedek, king of Salem, brought out bread and wine, and being a priest of God Most High, he blessed Abram with these words: “Blessed be Abram by God Most High, the creator of heaven and earth; and blessed be God Most High, who delivered your foes into your hand.” Then Abram gave him a tenth of everything” (Gen 14:18-20).

The author, based on what Genesis’ description about him, said something more important about Melchizedek eventhough the Scripture didn’t mention, saying: “His name first means righteous king, and he was also “king of Salem,” that is, king of peace. Without father, mother, or ancestry, without beginning of days or end of life, thus made to resemble the Son of God, he remains a priest forever.”

1.2/ The difference between the two orders of priesthood: The author used what he found out about Melchizedek and compared with what is described in the law about the Aaron’s order of priesthood, he came up with many differences and recorded in chapter 7, we only abbreviate as follows:

(1) The order of Aaron: According to the law, a person becomes a priest because he belongs to Aaron’s genealogy, not on his qualities or abilities. The priesthood of Aaron’s priests terminate with their death. God never gives an oath for those in this order. Lastly, the priests in this order must always offer sacrifices for themselves before they can offer sacrifices for others.

2/ Gospel: He looked around at them with anger, grieved at their hardness of heart.

2.1/ The conflict between Jesus and the Pharisees: St. Mark consicely described this conflict in two short verses: “Again he entered the synagogue, and a man was there who had a withered hand. And they watched him, to see whether he would heal him on the Sabbath, so that they might accuse him.”

While Jesus proclaimed the Good News and healed people in the synagogues, the Pharisees were also there. Their purpose was not to listen to his teaching, but to watch Jesus to see if he healed people on the Sabbath.

(1) Jesus’ reaction: When Jesus saw the man who had the withered hand, he had compassion on and he said to him: “Come here.” Jesus could tell the man to come back tomorrow or to come to a place where there were no Pharisees around to watch him; but in order to teach the Pharisees to correctly understand the Sabbath, he chose to dialogue with them. He asked them: “Is it lawful on the sabbath to do good or to do harm, to save life or to kill?” But they were silent. And he looked around at them with anger, grieved at their hardness of heart, and said to the man, “Stretch out your hand.” He stretched it out, and his hand was restored.

(2) The Pharisees’ reaction: People are silent because they don’t have an answer; but these Pharisees had the answer. They knew they had to do good works even on the Sabbath and to save people; but they were afraid that if they confess before all people, they must do what Jesus asked. They chose to be silent. Not only that, they went out, and immediately held counsel with the Herodians against him, how to destroy him.

– Sins separate us from God, but through Christ, we have a safe way to reconnect our relationship with God.

– We should obey and do what Christ taught us. If we don’t understand his teaching, we should spend time to learn. Don’t be so stubborn as the Pharisees to hang on to their sins.

– Religion isn’t about rigid laws, but the compassion we have for human sufferings and the help to lessen their sufferings.