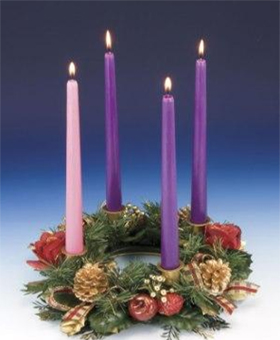 Thus says the Lord GOD:
Lo, I am sending my messenger
to prepare the way before me;
And suddenly there will come to the temple
the LORD whom you seek,
And the messenger of the covenant whom you desire.
Yes, he is coming, says the LORD of hosts.
But who will endure the day of his coming?
And who can stand when he appears?
For he is like the refiner’s fire,
or like the fuller’s lye.
He will sit refining and purifying silver,
and he will purify the sons of Levi,
Refining them like gold or like silver
that they may offer due sacrifice to the LORD.
Then the sacrifice of Judah and Jerusalem
will please the LORD,
as in the days of old, as in years gone by.

Lo, I will send you
Elijah, the prophet,
Before the day of the LORD comes,
the great and terrible day,
To turn the hearts of the fathers to their children,
and the hearts of the children to their fathers,
Lest I come and strike
the land with doom.

When the time arrived for Elizabeth to have her child
she gave birth to a son.
Her neighbors and relatives heard
that the Lord had shown his great mercy toward her,
and they rejoiced with her.
When they came on the eighth day to circumcise the child,
they were going to call him Zechariah after his father,
but his mother said in reply,
“No. He will be called John.”
But they answered her,
“There is no one among your relatives who has this name.”
So they made signs, asking his father what he wished him to be called.
He asked for a tablet and wrote, “John is his name,”
and all were amazed.
Immediately his mouth was opened, his tongue freed,
and he spoke blessing God.
Then fear came upon all their neighbors,
and all these matters were discussed
throughout the hill country of Judea.
All who heard these things took them to heart, saying,
“What, then, will this child be?
For surely the hand of the Lord was with him.”

I. THEME: John Baptist was the herald who prepared the Messiah’s way.

Today is the last day of preparation in Advent before we joyfully welcome the Infant Jesus in tomorrow midnight Mass. The Liturgy of the Word today wants us to pay a special attention to John Baptist because he was the herald to prepare the way of the Lord. He is the important person because if he didn’t prepare people to welcome the Messiah, they shall not recognize him. He must show them the way so that people can come to the Lord. With his guidance, people shall not be lost.

In the first reading, the prophet Malachi foretold about the messenger’s duty which is to prepare the way for the Messiah to come. Jewish tradition believes this messenger is the prophet Elijah. Jesus himself revealed to his disciples that John Baptist is the prophet Elijah. In the Gospel, the evangelist reported about the birth of John Baptist and all surprised events relating to this event. Both Zachariah and Elizabeth wanted to name the child, John Baptist, though they didn’t communicate with each other before, because Zachariah was punished by the angel Gabriel for not believing in the angel’s announcement. After he named his son, his tongue was healed and he could speak again.

1/ Reading I: The prophet Elijah must come before the Messiah to prepare a way for him.

1.1/ The messenger and the Messiah: The Book of the prophet Malachi was written after the exile, about 515 B.C. Like many other Prophetic Books, the prophet Malachi believed the Messiah’s age is going to happen soon: “Behold, I send my messenger to prepare the way before me, and the Lord whom you seek will suddenly come to his temple; the messenger of the covenant in whom you delight, behold, he is coming, says the LORD of hosts.” According to this prophecy, a messenger shall come in advance to prepare the way for the Messiah to come. When he finished his preparation, the Messiah shall come at any time.

1.2/ The role of the messenger: Jewish tradition believes the day which the Messiah shall come is a terrible day for the wicked, but a hopeful day for the Israelite remnant. The prophet Malachi talked about this day as follows: “But who can endure the day of his coming, and who can stand when he appears? For he is like a refiner’s fire and like fullers’ soap;he will sit as a refiner and purifier of silver, and he will purify the sons of Levi and refine them like gold and silver, till they present right offerings to the LORD.”

Two main duties of the Messiah’s herald are to refine and to purify people’s minds so that they shall be ready for the Day of the Lord. Two materials were used are fire of the refiner and bleach of the fuller. Fire is used to test the real gold and to refine gold from other materials. Bleach is used to purge away dirt and ink in clothes. The messenger needs to refine and to purify human minds so that they shall be worthy and firm in the Lord’s Day.

The prophet Malachi condemned the priests’ sins because they were lazy and insulting God in their worship. That was the reason why God didn’t accept their offerings. The Lord shall choose a more purified offering (Mal 1:1-2:17). Therefore, the main class which the prophet aimed at was the Levites and their souls: “Then the offering of Judah and Jerusalem will be pleasing to the LORD as in the days of old and as in former years.”

1.3/ The prophet Elijah was the Messiah’s messenger: Malachi foretold: “Behold, I will send you Elijah the prophet before the great and terrible day of the LORD comes.  And he will turn the hearts of fathers to their children and the hearts of children to their fathers, lest I come and smite the land with a curse.”

In parallel with human duty to God is their duty to others, specially to the people in their family. When human relationship with God was ignored or damaged, their relationship to others also suffered. The messenger must pay attention to the reconciliation between man to man, in family and society.

2/ Gospel: The birthday of John Baptist

2.1/ The joys when John Baptist was born: There were many reasons to be joyful at John Baptist’s birthday: Firstly, John’s parents were joyful because God gave them a son when they advanced in ages. Secondly, their joy was double because they had not only a child but a son to continue their lineage. Thirdly, there was another joy; Zachariah was no longer mute, he could speak again. Lastly and above all, John was selected to become the Messiah’s messenger. “And all these things were talked about through all the hill country of Judea;and all who heard them laid them up in their hearts, saying, “What then will this child be?” For the hand of the Lord was with him.”

2.2/ A strange thing happened when they named the child: And on the eighth day they came to circumcise the child; and they would have named him.” Like Vietnamese tradition, parents think “name is the person.” They will name the child in a way so that every time his name is called, they shall remember the environment of his birth, or their desire for him to become. There were three different opinions about the name for the child in today passage.

(1) Relatives wanted to call him Zachariah, his father’s name. This is normal because Jewish tradition has a habit to name the child after his father, specially in a family who doesn’t have many children.

(2) The mother’s will: Elizabeth opposed her relatives: “Not so; he shall be called John.”And they said to her, “None of your kindred is called by this name.” John is the abbreviation of  Jeho-hannah in Hebrew, which means: God’s gift. If one considers Elizabeth’s situation, the child is God’s gift to her family.

(3) The father’s will: Because of the conflict, they made signs to his father, inquiring what he would have him called.And he asked for a writing tablet, and wrote, “His name is John.” This was the name which the angel Gabriel commanded him to name the child (Lk 1:13).

– Each one of us is also God’s messenger to those God has given to us in our family, community and society.

– Our duties are to set good examples, to preach, to teach, to console, and to point out the way for people to come to God. We can only fulfill our duties if we have God in our soul. How can we lead them to God if we didn’t have Him in ourselves.

– We should learn from John Baptist about his simplicity, truthfulness, humility, and the way he prepared for people to welcome God.