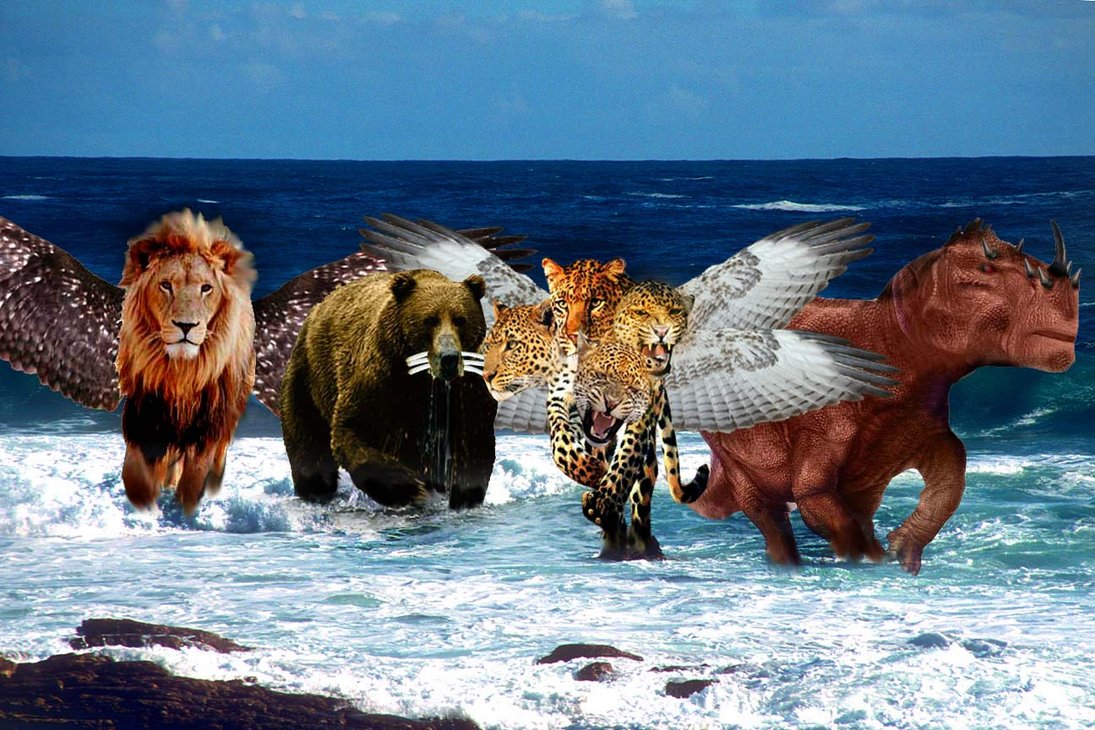 In a vision I, Daniel, saw during the night,
the four winds of heaven stirred up the great sea,
from which emerged four immense beasts,
each different from the others.
The first was like a lion, but with eagle’s wings.
While I watched, the wings were plucked;
it was raised from the ground to stand on two feet
like a man, and given a human mind.
The second was like a bear; it was raised up on one side,
and among the teeth in its mouth were three tusks.
It was given the order, “Up, devour much flesh.”
After this I looked and saw another beast, like a leopard;
on its back were four wings like those of a bird,
and it had four heads.
To this beast dominion was given.
After this, in the visions of the night I saw the fourth beast,
different from all the others,
terrifying, horrible, and of extraordinary strength;
it had great iron teeth with which it devoured and crushed,
and what was left it trampled with its feet.
I was considering the ten horns it had,
when suddenly another, a little horn, sprang out of their midst,
and three of the previous horns were torn away to make room for it.
This horn had eyes like a man,
and a mouth that spoke arrogantly.
As I watched,

Thrones were set up
and the Ancient One took his throne.
His clothing was snow bright,
and the hair on his head as white as wool;
His throne was flames of fire,
with wheels of burning fire.
A surging stream of fire
flowed out from where he sat;
Thousands upon thousands were ministering to him,
and myriads upon myriads attended him.

The court was convened, and the books were opened.
I watched, then, from the first of the arrogant words
which the horn spoke, until the beast was slain
and its body thrown into the fire to be burnt up.
The other beasts, which also lost their dominion,
were granted a prolongation of life for a time and a season.
As the visions during the night continued, I saw

One like a son of man coming,
on the clouds of heaven;
When he reached the Ancient One
and was presented before him,
He received dominion, glory, and kingship;
nations and peoples of every language serve him.
His dominion is an everlasting dominion
that shall not be taken away,
his kingship shall not be destroyed.

Jesus told his disciples a parable.
“Consider the fig tree and all the other trees.
When their buds burst open,
you see for yourselves and know that summer is now near;
in the same way, when you see these things happening,
know that the Kingdom of God is near.
Amen, I say to you, this generation will not pass away
until all these things have taken place.
Heaven and earth will pass away,
but my words will not pass away.”

I. THEME: Let find out God’s will through signs that occur in our life.

Like the Jews, many of us like to witness miracles; for example, the apparition of Mary; the bleeding of the Sacred Heart, the healings of Padre Pio or Father Truong Buu Diep. When something like those happen, people are flocking to there to witness and to pray for.

People should understand God’s purpose when He works miracles; it is to arouse faith or to deliver a message. For example, Jesus did miracles so that people might recognize God’s power in him and believe he was sent by God. If after witnessed a miracle, people still didn’t believe or suspect or deny even a miracle itself, how could it benefit them?

Today readings teach people they should understand history and all events happened in the world to find out God’s will for them. In the first reading, the prophet Daniel would like people to recognize God’s absolute power over all worldly powers, so that people firmly believe in Him, especially when they are in trials or persecuted. In the Gospel, Jesus reminded people that when they see trees come out in leaf, they know that the summer is already near. So also, when they see these things taking place in the world, they know that the kingdom of God is near.

1/ Reading I: His dominion is an everlasting dominion, which shall not pass away, and his kingdom shall not be destroyed.

The first vision he saw is about four great beasts came up out of the sea, different from one another. “The first was like a lion and had eagles’ wings. Then as I looked its wings were plucked off, and it was lifted up from the ground and made to stand upon two feet like a man; and the mind of a man was given to it.” The second one was like a bear. “It was raised up on one side; it had three ribs in its mouth between its teeth; and it was told, `Arise, devour much flesh.’” The third was like a leopard, “with four wings of a bird on its back; and the beast had four heads; and dominion was given to it.” The fourth beast was “terrible and dreadful and exceedingly strong; and it had great iron teeth; it devoured and broke in pieces, and stamped the residue with its feet. It was different from all the beasts that were before it; and it had ten horns. I considered the horns, and behold, there came up among them another horn, a little one, before which three of the first horns were plucked up by the roots; and behold, in this horn were eyes like the eyes of a man, and a mouth speaking great things.”

Three first beasts represented for three empires that subsequently governed all nations in the Near East. They are Assyria, Babylon, and Persia. The author didn’t name the fourth beast, he only described its characters. This beast represented for the Greek empire which followed after the Medes empire. The little horn represented for king Antiochus IV Epiphanes. He is the Greek king, very wicked and cruel. He commanded the Jews to deny God, to violate Mosaic law, and commit sacrilege in the Temple.

1.2/ The vision of the Son of Man: After the time of all these empires is the Messiah’s time. The author described the vision of the heavenly court as follows: “As I looked, thrones were placed and One that was ancient of days took his seat; his raiment was white as snow, and the hair of his head like pure wool; his throne was fiery flames, its wheels were burning fire. A stream of fire issued and came forth from before him; a thousand thousands served him, and ten thousand times ten thousand stood before him; the court sat in judgment, and the books were opened. I looked then because of the sound of the great words which the horn was speaking. And as I looked, the beast was slain, and its body destroyed and given over to be burned with fire. As for the rest of the beasts, their dominion was taken away, but their lives were prolonged for a season and a time.”

The mystical description of the one on the throne is God Himself, the Lord of heaven and earth. He has power over all earthly powers. He let the emperors of all empires grew strong in a certain time, and then, He took away their power when their time were ended. No one could oppose Him.

The Messiah was described as follows: “I saw in the night visions, and behold, with the clouds of heaven there came one like a Son of Man, and he came to the Ancient of Days and was presented before him. And to him was given dominion and glory and kingdom, so that all peoples, nations, and languages should serve him.” The Messiah had a figure like a man but came from “the clouds of heaven.” He received his mission, kingdom, glory and power from God Himself. The author described about his kingdom, “his dominion is an everlasting dominion, which shall not pass away, and his kingdom one that shall not be destroyed.” In other words, he will be a king and govern all people for ever.

2/ Gospel: When you see these things taking place, you know that the kingdom of God is near.

2.1/ To interpret phenomena happened in the world: For example, when people observe phenomena in the world, if they see the same result that happens in a certain condition, then they conclude it will also happen like that the next time. Jesus illustrated a practical example which hia audiences had experience: “Look at the fig tree, and all the trees; as soon as they come out in leaf, you see for yourselves and know that the summer is already near.”

2.2/ To interpret phenomena happened on the Last Day: Jesus continued: “So also, when you see these things taking place, you know that the kingdom of God is near.” The Last Day will certainly happen, it is not the product of human imagination. Jesus declared to his disciples: “Truly, I say to you, this generation will not pass away till all has taken place. Heaven and earth will pass away, but my words will not pass away.”

– God controls all powers and phenomena that occur in the cosmos whether they happened, are happening or will happen. Our duty is to firmly believe in his authority, especially when we are suffered or persecuted.

– We need to find out God’s will through events which happen in life: natural phenomena, historical and personal events, and what will happen before the Last Day.

– We need to pay attention to the most important facts of life which we frequently hear in the Liturgy of the Word of the last few weeks; they are: death, resurrection, and judgment.