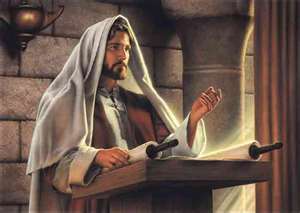 This word of the LORD came to me:
Go, cry out this message for Jerusalem to hear!

I remember the devotion of your youth,
how you loved me as a bride,
Following me in the desert,
in a land unsown.
Sacred to the LORD was Israel,
the first fruits of his harvest;
Should any presume to partake of them,
evil would befall them, says the LORD.

When I brought you into the garden land
to eat its goodly fruits,
You entered and defiled my land,
you made my heritage loathsome.
The priests asked not,
“Where is the LORD?”
Those who dealt with the law knew me not:
the shepherds rebelled against me.
The prophets prophesied by Baal,
and went after useless idols.

Be amazed at this, O heavens,
and shudder with sheer horror, says the LORD.a
Two evils have my people done:
they have forsaken me, the source of living waters;
They have dug themselves cisterns,
broken cisterns, that hold no water.

The disciples approached Jesus and said,
“Why do you speak to the crowd in parables?”
He said to them in reply,
“Because knowledge of the mysteries of the Kingdom of heaven
has been granted to you, but to them it has not been granted.
To anyone who has, more will be given and he will grow rich;
from anyone who has not, even what he has will be taken away.
This is why I speak to them in parables, because
they look but do not see and hear but do not listen or understand.
Isaiah’s prophecy is fulfilled in them, which says:

I. THEME: If leaders don’t talk about and witness for God, people shall forget Him.

The most important duty of leaders and prophets is to talk about God and to do all they can for people to recognize Him; but in reality, many leaders forgot about this important duty. In place of it, they chase after idols and teach people to do the same. Many leaders in our society are trying to eliminate God from people’s life. They forbid young people to pray to God, or even a moment of silence to remember Him before the beginning of a class. They want to discard the Ten Commandments which are displaying in many courts, etc.

Today readings remind people their prophetic duty for God. In the first reading, God condemned the Israel’s leaders because they didn’t fulfill of their duty to teach people about Him. In the Gospel, when the disciples asked him the reason for his using of parables to teach people, he answered: “Because knowledge of the mysteries of the kingdom of heaven has been granted to you, but to them it has not been granted.”

1/ Reading I: The Israel’s leaders didn’t fulfill their duty.

1.1/ The Israelites forgot God: People are very easy to forget; therefore, they need spiritual leaders to constantly remind them of what God has done for them. If not, it only needs a generation, the following generations shall not know about God. God’s prophets continually reminded people about God’s love for them which was expressed through the Exodus. He brought them out of their slavery to the Egyptians, accompanied them during forty years in the desert and led them to the Promise Land.

In today passage, we hear a similar message. The Lord said to Jeremiah, “Go, cry out this message for Jerusalem to hear! I remember the devotion of your youth, how you loved me as a bride, following me in the desert, in a land unsown. Sacred to the Lord was Israel, the first fruits of his harvest; should anyone presume to partake of them, evil would befall him, says the Lord.” The purpose when prophets repeated these words was for the Israelites to examine their life and to return to God’s loyal love. Jeremiah continued to write, “When I brought you into the garden land to eat its goodly fruits, you entered and defiled my land, you made my heritage loathsome.”

(1) Jugdes and kings: In the beginning, Israel didn’t have kings because God is their king. He governed them through a judge or a prophet. When the Israelites saw other nations have their kings, they asked Samuel to give them a king to lead them like other nations. Samuel, after consulted God, put Saul as the first king to govern the Israelites. In today passage, prophet Jeremiah called kings as shepherds. They opposed God by establishing the altars for foreign gods and telling people to worship these gods.

(2) Priests and High Priests: They are the people who took charge of worship in Jerusalem temple. When king Jeroboam made two golden calves and commanded people to worship them, he also established his own priests and high priests to be in charge of worship, not needed to be from Levi’s tribe. In today passage, these priests didn’t ask, “Where is the Lord?”

(4) Prophets: are those who speak in the place of God. There were many false prophets who didn’t say what God wants, but “the prophets prophesied by Baal, and went after useless idols.”

All these leaders completely put God out of their life and chased after material gains, as Jeremiah said, “They have forsaken me, the source of living waters; they have dug themselves cisterns, broken cisterns that hold no water.” Therefore, they shall be amazed at God’s punishment and all of they chased after shall be completely destroyed.

2/ Gospel: The difficult questions which are hard to answer.

(1) Why did Jesus use parables? Parables are stories which used familary imageries to express the truth and to teach moral lessons. They are examples which are used to clarify what had been mentioned. Therefore, parables aren’t necessary if the audience already understood what the author wanted to say. Parables are apted for average people so that the author can lead them from what they already knew to what they don’t know yet, from concrete to abstract, from what can see in presence to what shall come in future.

(3) Why do “they look but do not see and hear but do not listen or understand?” First, we need to know that this is only a Jewish way of expression because they so used in attributing all things which happen in the universe to God. However, they don’t believe that God is the cause for people to sin because people have a full conscience and freedom to do what they want. Jesus only wanted to say that if they don’t take opportunities to learn about God and to believe in Him, it shall be a time that “You shall indeed hear but not understand you shall indeed look but never see.” For example, the conscience of people who are so used in wrong things.

– In order to believe in God, people need to know about Him; but how can people know if there is no one to talk to them about God? If parents and spiritual leaders don’t fulfill this important duty, how shall the future generations know God and believe in Him?