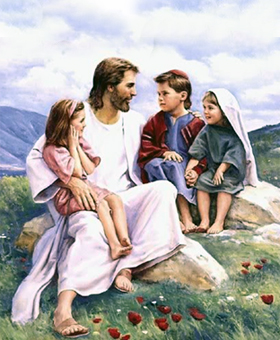 Gospel (Lk 9:46-50): An argument arose among the disciples
about which of them was the greatest.
Jesus realized the intention of their hearts and took a child
and placed it by his side and said to them,
“Whoever receives this child in my name receives me,
and whoever receives me receives the one who sent me.
For the one who is least among all of you
is the one who is the greatest.”
Then John said in reply,
“Master, we saw someone casting out demons in your name
and we tried to prevent him because he does not follow in our company.”
Jesus said to him,
“Do not prevent him, for whoever is not against you is for you.”

I. THEME: Learn to sacrifice ourselves to serve others.

Today readings pay a special attention to sacrifice oneself to serve others’ need. In the first reading, the prophet Zechariah advices the Israelites to believe in God’s love for them so that they can concentrate on the building of the peaceful Jerusalem. In the Gospel, Jesus shows his disciples the way to become the greatest in heaven, that is, to become the least and to serve chilren.

1/ Reading I: The vision of the peaceful Jerusalem

1.1/ The confident city shall be established on the Holy Mountain of God. The RSV translation confused between the past, present, and future in the second verse; therefore, it cannot express clearly the meaning of Zechariah’s oracle. These two verses must be translated and analyzed as follows:

(1) The second verse is what happened in the past: “Thus saith the LORD of hosts; I was jealous for Zion with great jealousy, and I was jealous for her with great fury.” The LXX put the two verbs in the aorist tense; the MT put the two verbs in the piel tense. This verse reminds the Israelites the reason of their Exile: they caused the Lord God jealous with fury because of their life without Him and their injustice with others.

(2) The third verse is what will be in the future: “Thus says the LORD: I will return to Zion, and I will dwell within Jerusalem; Jerusalem shall be called the faithful city, and the mountain of the LORD of hosts, the holy mountain.” Both the LXX and the MT put these three verbs in the future tense. This verse wants to say to people that if they recognize and repent their sins, God will continue His relationship with them. Jerusalem city and Zion mountain are two symbols for this good relationship: Jerusalem will be called the faithful city, and Mt. Zion shall be called the holy mountain where the Lord of hosts dwells.

1.2/ Jerusalem city will be the place for God’s people in the peaceful time.

(1) The sign of the peaceful time: “Thus says the LORD of hosts: Old men and old women, each with staff in hand because of old age, shall again sit in the streets of Jerusalem. The city shall be filled with boys and girls playing in its streets.”

In war, not many people reach their old age, because they were died in fighting to protect the country. But in peaceful time, there will be lots of old men and women walking in the Jerusalem city, or playing cards in the public garden. One more sign of peaceful time is the presence of many boys and girls playing in Jerusalem streets. In war, many mothers could not have children because of the absence of fathers; but when war ended, many children will appear and play in all streets.

(2) The peaceful Jerusalem can be achieved: At the beginning when the Israelites came back from the Exile, not many people thought about the peaceful Jerusalem, because they had to face ruins, financial harships, and threats from surrounding enemies. The prophet Zechariah must encourage people by God’s oracle: “Thus says the LORD of hosts: Even if this should seem impossible in the eyes of the remnant of this people, shall it in those days be impossible in my eyes also, says the LORD of hosts?” What seems impossible to men, is always possible to God’s power. He will act on the Israelites’ minds who were scattered every places, so that they will come back and dwell in Jerusalem to continue their relationship with God in faithfulness and justice.

2/ Gospel: Who is the least among you, that one is the greatest.

2.1/ The desire of vainglory, power and material gains: Today report continues yesterday report which is about Jesus’ second forewarning about his Passion. The disciples reacted by arguing among them to find out: “Who is the greatest among them?”

These desires are not only existed among the disciples, but also happened everywhere and everytime. Most people want to have one or all three of them. Let us examine every one of them:

+ Vainglory: This is the tendency to become famous or to be known by many. We will not mention the people who are deservedly to be known and praised because of their useful works. There are some not only have no talent but also no virtue, but want to be well-known. These people only do what are important, only work before others’ presence, or make noise to draw people’s attention when they have to work. These people can also find a way to debase others so they will look better, or falsify good intentions of others.

+ Power: This is the tendency to give a command, not to take a command from anyone.

+ Material gains: This tendency is hidden in two above tendencies. We will not mention those who work hard, their material gains are reasonable. There are some who want to have materrial gains by any cost, such as: bribery or using their power to take away what belongs to others.

2.2/ The right way to become the greatest: Jesus realized the intention of their hearts and took a child and placed it by his side and said to them, “Whoever receives this child in my name receives me, and whoever receives me receives the one who sent me. For the one who is least among all of you is the one who is the greatest.” Children have nothing to pay back to adults. They have no glory, nor power nor material things to give to adults. In opposition, they entirely rely on parents, big brothers and sisters, teachers… to teach, to feed and to protect them. There are two main reasons why we should serve them for free:

(1) God will compensate us for what we have done for them: Jesus is clearly in connecting the serving of children and those in needs with the serving of him and God, and those who refused to serve these people, refused to serve him and God. In other place, Jesus says that if one who served only those who can reward them, God doesn’t have to reward them because they already got their reward from people. But if one chose to serve those who had nothing to pay back, God will compensate  for them. When God pays back, it is much more than what one expects; therefore, we should help those who had nothing to pay back.

(2) If we receive gratis, give as gratis: When we entered into this world, we did not bring anything with us; and we will get out, we will not bring with us anything. All what we have are from God, our parents, and those who lived before us. We cannot pay back to God because He does not need anything from men. Not many of us have opportunity to pay back to our parents and those before us. The only thing we can do is to help future generation to grow healthy, to love God and to keep His commandments.

– We must live a right relationship with God and others to have a true peace and happiness; if not, war, exile, and suffering will certainly happen.

– Since we received love and care from God, parents, and former generations, we must also sacrifice ourselves to serve future generations.