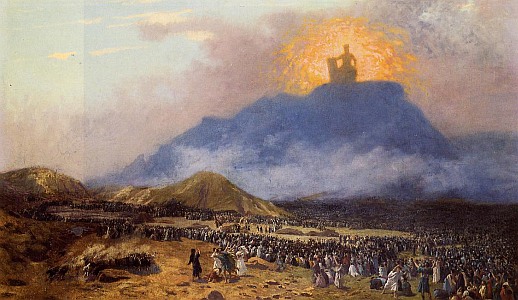 1/ First Reading: RSV Exodus 19:1 On the third new moon after the people of Israel had gone forth out of the land of Egypt, on that day they came into the wilderness of Sinai. 2 And when they set out from Rephidim and came into the wilderness of Sinai, they encamped in the wilderness; and there Israel encamped before the mountain. 9 And the LORD said to Moses, “Lo, I am coming to you in a thick cloud, that the people may hear when I speak with you, and may also believe you forever.” Then Moses told the words of the people to the LORD. 10 And the LORD said to Moses, “Go to the people and consecrate them today and tomorrow, and let them wash their garments, 11 and be ready by the third day; for on the third day the LORD will come down upon Mount Sinai in the sight of all the people. 16 On the morning of the third day there were thunders and lightnings, and a thick cloud upon the mountain, and a very loud trumpet blast, so that all the people who were in the camp trembled. 17 Then Moses brought the people out of the camp to meet God; and they took their stand at the foot of the mountain. 18 And Mount Sinai was wrapped in smoke, because the LORD descended upon it in fire; and the smoke of it went up like the smoke of a kiln, and the whole mountain quaked greatly. 19 And as the sound of the trumpet grew louder and louder, Moses spoke, and God answered him in thunder. 20 And the LORD came down upon Mount Sinai, to the top of the mountain; and the LORD called Moses to the top of the mountain, and Moses went up.

2/ Gospel: RSV Matthew 13:10 Then the disciples came and said to him, “Why do you speak to them in parables?” 11 And he answered them, “To you it has been given to know the secrets of the kingdom of heaven, but to them it has not been given. 12 For to him who has will more be given, and he will have abundance; but from him who has not, even what he has will be taken away. 13 This is why I speak to them in parables, because seeing they do not see, and hearing they do not hear, nor do they understand. 14 With them indeed is fulfilled the prophecy of Isaiah which says: `You shall indeed hear but never understand, and you shall indeed see but never perceive. 15 For this people’s heart has grown dull, and their ears are heavy of hearing, and their eyes they have closed, lest they should perceive with their eyes, and hear with their ears, and understand with their heart, and turn for me to heal them.’ 16 But blessed are your eyes, for they see, and your ears, for they hear. 17 Truly, I say to you, many prophets and righteous men longed to see what you see, and did not see it, and to hear what you hear, and did not hear it.

I. THEME: People need to value God’s grace and to be prepared to receive it.

God continually concerns about human needs, reveals the truth for people and bestows graces on them. The problem is on human side: do they recognize God’s grace and properly respond to it? If they recognize and respond, they shall have more graces; if not, even what they are possessing shall gradually disappear. One most dangerous attitude that makes people separating from God is their pride. They think that they know everything, have enough and have no need of God.

Today readings illustrate again God’s love, expressing through His loving concern for humanity. In the first reading, God wants Moses to prepare for His theophany by preparing for the Israelites so that they could meet Him on Mt. Sinai. The purpose of the theophany is for people to witness God’s power and to confirm Moses’ position as God’s chosen leader to lead people into the Promise Land. In the Gospel, Jesus explained for his apostles why he used parables to talk to people–their mind can’t fathom the mysteries of God’s kingdom as the apostles. They must study hard and need God’s help to understand them; if they don’t, even what they have heard from Jesus shall disappear.

(1) They must avoid the attitude of insulting God and His prophets: A Vietnamese adage properly expresses people’s insulted attitude for God and His messengers, “When people are so close to the temple, they call god their friend.” This adage means that when people enjoy so often of God’s love and blessings; they think it is God’s duty. When people are presented before God so often, they show their disrespect by talking to or playing with each other right in front of Him. When people are so familiar with their leaders by eating or playing with them, they consider their leaders as their friends and have no respect for them. Therefore, God must show His power so people might know that there is an infinite distance between God and men. If God doesn’t love and shows His care, they are also like sand on the seashore. God can annihilate people anytime.

(2) The Israelites must prepare their soul and body before meeting God: The Lord said to Moses, “Go to the people and consecrate them today and tomorrow, and let them wash their garments,and be ready by the third day; for on the third day the Lord will come down upon Mount Sinai in the sight of all the people.”

To appear before God, the Lord of heaven and earth, is not a normal thing to do; therefore, people need to be prepared both soul and body. The saints used to advise people that if they are so well prepared before they meet an earthly king or leader, they must be even more prepared than that when they appear before the Lord of heaven and earth. There are some people who show their disrespect to God by wearing their garment for the beach to go to Mass; or chewing gum until they take it out with one hand and receive Christ’s body with other hand; or by letting their children to run around in the church as though they are in the public parks. If God punishes these people as those who were punished in the Old Testament, how many of us can survive to be present before God?

1.2/ God showed His power before the Israelites on the top of Mt. Sinai: According to tradition, God used to show Himself on the top of the mountains with people; for examples: with the prophet Elijah on Mt. Horeb, with three apostles on Mt. Thabor. Mt. Sinai is a special mountain because of its mystical appearance; it is covered by clouds upon clouds. The pilgrimages like to be on top of the mountain before the sunrise to see its glory over all the surrounding mountains. To achieve this, they must climb the mountain when it is still dark.

The author reported God’s theophany as followed, “On the morning of the third day there were thunders and lightning, and a thick cloud upon the mountain, and a very loud trumpet blast, so that all the people who were in the camp trembled.Then Moses brought the people out of the camp to meet God; and they took their stand at the foot of the mountain.And Mount Sinai was wrapped in smoke, because the Lord descended upon it in fire; and the smoke of it went up like the smoke of a kiln, and the whole mountain quaked greatly.As the sound of the trumpet grew louder and louder, Moses spoke; and God answered him in thunder.”

2/ Gospel: The difficult questions which are hard to answer.

(1) Why did Jesus use parables? Parables are stories which used familary imageries to express the truth and to teach moral lessons. They are examples which are used to clarify what had been mentioned. Therefore, parables aren’t necessary if the audience already understood what the author wanted to say. Parables are apted for average people so that the author can lead them from what they already knew to what they don’t know yet, from concrete to abstract, from what can see in presence to what shall come in future.

(3) Why do “they look but do not see and hear but do not listen or understand?” First, we need to know that this is only a Jewish way of expression because they so used in attributing all things which happen in the universe to God. However, they don’t believe that God is the cause for people to sin because people have a full conscience and freedom to do what they want. Jesus only wanted to say that if they don’t take opportunities to learn about God and to believe in Him, it shall be a time that “You shall indeed hear but not understand you shall indeed look but never see.” For example, the conscience of people who are so used in wrong things.

– To understand the mystery of the kingdom, we need to have a humble attitude and time to study God’s word.