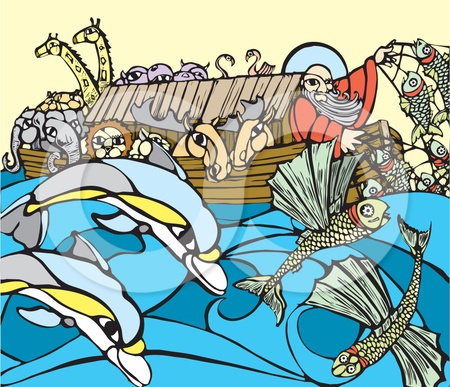 Brothers and sisters:
I consider that the sufferings of this present time are as nothing compared with the glory to be revealed for us.
For creation awaits with eager expectation
the revelation of the children of God;
for creation was made subject to futility,
not of its own accord but because of the one who subjected it,
in hope that creation itself
would be set free from slavery to corruption
and share in the glorious freedom of the children of God.
We know that all creation is groaning in labor pains even until now;
and not only that, but we ourselves,
who have the firstfruits of the Spirit,
we also groan within ourselves
as we wait for adoption, the redemption of our bodies.
For in hope we were saved.
Now hope that sees for itself is not hope.
For who hopes for what one sees?
But if we hope for what we do not see, we wait with endurance.

Jesus said, “What is the Kingdom of God like?
To what can I compare it?
It is like a mustard seed that a man took and planted in the garden.
When it was fully grown, it became a large bush
and the birds of the sky dwelt in its branches.”
Again he said, “To what shall I compare the Kingdom of God?
It is like yeast that a woman took
and mixed in with three measures of wheat flour
until the whole batch of dough was leavened.”

I. THEME: The relationship between human beings and God’s other creatures

Many authors of Scripture recognizes a close relationship between human beings and other creatures in the world. According to the author of Genesis, God created all other creatures and handed to men to control and to benefit human beings (Gen 1:28). At the beginning, when man did not sin yet, all beasts lived with human beings and were not afraid of them. The prophet Isaiah forsaw the reign of the Messiah in which all beasts will live with human beings, “the wolf shall dwell with the lamb, and the leopard shall lie down with the kid, and the calf and the lion and the fatling together, and a little child shall lead them” (Isa 11:1-8). The authors of 2 Peter and of Revelation talked about “new heaven, new earth” will appear and the kingdom of God will have no end for the righteous (2 Pet 3:13, Rev 21:1).

Today readings center around the relationship between human beings and other creatures in the world. In the first reading, St. Paul described this relationship through the effect of human sins on the creatures, and through the expectation of the creatures that they will be shared in human glory, when God will bestow glory to human beings. In the Gospel, Jesus compared the kingdom of heaven as a grain of mustard seed and as leaven. A mustard seed can become a big tree so that the birds of the air will come to make their nests. The leaven can leaven three measures of flour to become bread for human beings.

1/ Reading I: The creation waits with eager longing for the revealing of the sons of God.

Sins brought not only human beings to death, but other creatures must also share their fate with them. After the Great Flood, God signed a new covenant with Noah and with all living creatures (Gen 9:12-13; cf. Psa 135). St. Paul confirmed the relationship between God’s creation and human beings in sharing Christ’s redemption for men: “For the creation waits with eager longing for the revealing of the sons of God.”

1.2/ The creation is expecting to share in human glory: Since the creation shared in human suffering, they also expect to share in human glory. St. Paul described this expectation as follows: “For the creation was subjected to futility, not of its own will but by the will of him who subjected it in hope;because the creation itself will be set free from its bondage to decay and obtain the glorious liberty of the children of God.We know that the whole creation has been groaning in travail together until now;and not only the creation, but we ourselves, who have the first fruits of the Spirit, groan inwardly as we wait for adoption as sons, the redemption of our bodies.”

The Christian have become God’s children and received the Holy Spirit as the first grace; now they only hope for the day in which they will receive the glory which God has promised. During waiting, they must be persevered in sufferings, and should not loose the hope, because “the sufferings we are enduring cannot be compared with the glory which God will reveal in us.”

2/ Gospel: God gives human beings the potential to enlarge the kingdom of God.

Jesus gave his audience two images about the potential of the kingdom of God:

(1) A grain of mustard seed, though tiny, but God gives it a potential to become a big tree. Same thing happens to the kingdom of God, beginning with the Twelve Jewish men, has now become a religion which has about 1/5 of the world’s population; and is still enlarging to the end of the earth.

(2) A grain of mustard seed must be decayed before it can germinate and become a big tree; if not, it remains lonely as a seed. Same thing happens to the kingdom of God, in order for the kingdom of God to enlarge, the Church needs people who are ready to sacrifice and to accept sufferings by proclaiming the Good News to all people and nations.

(3) When it becomes a tree, the birds of the air can come and make their nests: God gives people a potential to bear fruits for Him, not to keep for themselves. Like the mustard tree gives space for the birds of the air, people must use God’s gift and grace to protect the weak, not only to protect themselves. If everybody only selfishly takes care of oneself, how can the kingdom of God be enlarged?

2.2/ It is like leaven which a woman took and hid in three measures of flour: Leaven is the old flour which was kept to make bread. Its main purpose is to rise up flour. Two things we need to pay attention to:

(2) Christian must fulfill their duty to rouse up people by their preaching and witnessing so that when people hear the Good News and see their good works, they will believe in God. One becomes leaven to other, and other continues to do so. By doing as such, the kingdom of God is enlarging.

– We have a relationship with other creatures in God’s plan; we must know how to properly use them and cannot maltreat them.

– When we live correctly our relationship with God, others, and all creatures, even animals will obey us. The history of the saints, such as, St. Francis of Assissi, Anthony of Padua, and Martin de Porres are the living examples.

– To develop God’s kingdom, we must first recognize God’s gifts in us and its potential; next we need to develop these gifts so that they can reach its potential; and finally, we must use them to benefit others and to enlarge the kingdom of God.