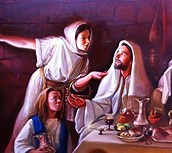 1/ First Reading: NAB Galatians 1:13 For you heard of my former way of life in Judaism, how I persecuted the church of God beyond measure and tried to destroy it, 14 and progressed in Judaism beyond many of my contemporaries among my race, since I was even more a zealot for my ancestral traditions. 15 But when (God), who from my mother’s womb had set me apart and called me through his grace, was pleased 16 to reveal his Son to me, so that I might proclaim him to the Gentiles, I did not immediately consult flesh and blood, 17 nor did I go up to Jerusalem to those who were apostles before me; rather, I went into Arabia and then returned to Damascus. 18 Then after three years I went up to Jerusalem to confer with Kephas and remained with him for fifteen days. 19 But I did not see any other of the apostles, only James the brother of the Lord. 20 (As to what I am writing to you, behold, before God, I am not lying.) 21 Then I went into the regions of Syria and Cilicia. 22 And I was unknown personally to the churches of Judea that are in Christ; 23 they only kept hearing that “the one who once was persecuting us is now preaching the faith he once tried to destroy.” 24 So they glorified God because of me.

2/ Gospel: NAB Luke 10:38 As they continued their journey he entered a village where a woman whose name was Martha welcomed him. 39 She had a sister named Mary (who) sat beside the Lord at his feet listening to him speak. 40 Martha, burdened with much serving, came to him and said, “Lord, do you not care that my sister has left me by myself to do the serving? Tell her to help me.” 41 The Lord said to her in reply, “Martha, Martha, you are anxious and worried about many things. 42 There is need of only one thing. Mary has chosen the better part and it will not be taken from her.”

I. THEME: A believer needs to be wise and eager.

In life, we used to see two contrasted kinds of people: one kind is talkative, eager and active; the other kind is quiet, profound and meditative. Both have advantages and defects: the one who is eager and active without guiding principles shall easily be lost and become radical; the one who is so quiet and meditative shall easily be witless and inactive.

Today readings give us few examples of these people. In the first reading, St. Paul is a typical example of the first kind. He was eager to persecute the Christians because he thought they are perverse and against the Jewish tradition; but once he was shown the right way by the Resurrected Christ, he became the eager preacher to the Gentiles more than anyone else. In the Gospel, Martha was so eager to welcome Jesus that she forgot to spend time to converse with him; while Mary spent all her time just to listen to Jesus’ teaching.

1/ Reading I: Christ used Paul’ eagerness as an instrument for preaching the Gospel to the Gentiles.

1.1/ St. Paul blindly eagerness before his conversion: He himself confessed of his past, “For you heard of my former way of life in Judaism, how I persecuted the church of God beyond measure and tried to destroy it, and progressed in Judaism beyond many of my contemporaries among my race, since I was even more a zealot for my ancestral traditions.”

The event on the way to Damascus in which Paul was felt from his horse and became blind completely changed his life. Christ appeared and showed him the dangers of his blinded eagerness, “It is hard for you to kick against the goad” (Acts 26:14).

1.2/ St. Paul spent time with Christ in the Arabian dessert to learn about divine revelations: In the Damascus event, Christ revealed his will for Paul that he wants him to be the apostle for the Gentiles. Since Paul wasn’t one of Christ’s disciple during his life on earth, he needed to privately instructed by Christ. This fact is very important because Paul’s opponents accused him of not knowing Christ. In today passage, he mentioned that right after his conversion, he didn’t go to Jerusalem to meet other apostles; instead, he went to Arabia to spent three years with Christ in this dessert. During this time, Christ revealed many revelations and prepared him for his mission in the future. After this period, Paul went up to Jerusalem to meet Peter and some of the apostles.

1.3/ Paul’s new eagerness after three years of meditation in the dessert: God didn’t take away Paul’s eagerness, but used it as the useful instrument for the preaching of the Gospel, as he described: “As to what I am writing to you, behold, before God, I am not lying. Then I went into the regions of Syria and Cilicia. And I was unknown personally to the churches of Judea that are in Christ; they only kept hearing that “the one who once was persecuting us is now preaching the faith he once tried to destroy.” So they glorified God because of me.”

Looking back at St. Paul’s life, we can see God’s wise and wonderful providence. He didn’t destroy his eagerness so that he stops to persecute the Christians; but He let him see His wonderful plan and invited him to participate in; and then He sent him out to preach the Gospel for the Gentiles. From that time on, he became the one who eagerly preaches the Gospel even though he must accept lots of sufferings, persecution, prison and even death for his preaching of the Gospel.

2/ Gospel: “Martha, Martha, you are anxious and worried about many things.”

Bethany is the village of the three brother and sisters: Lazarus, Mary and Martha. This village is close to Mt. Olive and the Temple Jerusalem. Jesus and his disciples frequently visits them when he traveled to Jerusalem. This visit might be the last one before his Passion.

2.1/ The subjective view of Martha: To welcome Jesus to their house was an honor for them. This is why Martha eagerly prepared food for Jesus. There were many things to do and Mary supposed to help her and she did not help. She kept sitting at Jesus’ feet to listen to his teachings. Martha felt uneasy with her sister, so she came and said to Jesus, “Lord, do you not carethat my sister has left me by myself to do the serving? Tell her to help me.”

A special guest comes to visit is not only to eat; but also an opportunity to talk with members of a family. If the head of a family considers the receiving of a guest is important, she can prepare food in advance, so that she will have time to talk when her guest comes. Martha probably thought that preparing food for Jesus was the most important thing to do; therefore she forgot about her talking with Jesus. Moreover, she could secretly give a signal to Mary in order to ask her for help; but she did not do as such and also blame on her guest, Jesus, because he did not recognize Mary’s duty to help her.

(1) Mary’s wisdom: She recognized the importance of talking to Jesus of which her sister did not recognize. Moreover, Mary has certainly heard Jesus’ teachings and she knew how important they were. Therefore, instead of being busy like her sister, she chose to welcome Jesus and to listen to his words. We can see how proper it is if Martha did not voice her complaint, she worried about preparing food while Mary about receiving Jesus.

(2) Jesus’ advice: To respond to Martha’s complaint, Jesus said to her: “Martha, Martha, you are anxious and worried about many things. There is need of only one thing. Mary has chosen the better partand it will not be taken from her.” Jesus did not say preparing of food is not important, but he considered it not as important as listening to God’s words. If other things prevent one to listen or to learn God’s word, one must have courage to discard them to choose listening to God’s word as Mary had chosen. To Jesus, if he had to fast or to have a simple meal in order for Martha to have an occasion to listening to God’s word, he will be happy to do so.

– We are born differently: some are eager and active all the time; some are quiet and like to meditate. We can’t compare them and say which one is better; but both need to compensate for each other. The latter can provide orientation for the earlier. However, we need to balance both dimensions in our life.

– When we are young and healthy, we like to be active and orientated to the future; but when we become old, we have no health to do many things; instead we have a tendency to be quiet and meditative on our past. Therefore, there shall be a conflict between the old and the young generation, but we shouldn’t exclude each other. The young’s eagerness needs to be guided by the old’s wisdom.

– The wisdom we need to learn above all is the divine wisdom revealed in Scripture. Choosing to listen to God’s words is the best option since no one can take it away from us.