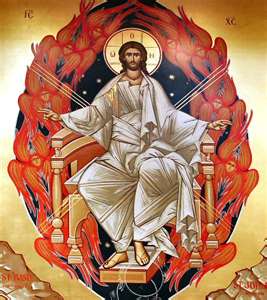 Seek the LORD while he may be found,
call him while he is near.
Let the scoundrel forsake his way,
and the wicked his thoughts;
let him turn to the LORD for mercy;
to our God, who is generous in forgiving.
For my thoughts are not your thoughts,
nor are your ways my ways, says the LORD.
As high as the heavens are above the earth,
so high are my ways above your ways
and my thoughts above your thoughts.

Brothers and sisters:
Christ will be magnified in my body, whether by life or by death.
For to me life is Christ, and death is gain.
If I go on living in the flesh,
that means fruitful labor for me.
And I do not know which I shall choose.
I am caught between the two.
I long to depart this life and be with Christ,
for that is far better.
Yet that I remain in the flesh
is more necessary for your benefit.

Only, conduct yourselves in a way worthy of the gospel of Christ.

Jesus told his disciples this parable:
“The kingdom of heaven is like a landowner
who went out at dawn to hire laborers for his vineyard.
After agreeing with them for the usual daily wage,
he sent them into his vineyard.
Going out about nine o’clock,
the landowner saw others standing idle in the marketplace,
and he said to them, ‘You too go into my vineyard,
and I will give you what is just.’
So they went off.
And he went out again around noon,
and around three o’clock, and did likewise.
Going out about five o’clock,
the landowner found others standing around, and said to them,
‘Why do you stand here idle all day?’
They answered, ‘Because no one has hired us.’
He said to them, ‘You too go into my vineyard.’
When it was evening the owner of the vineyard said to his foreman,
‘Summon the laborers and give them their pay,
beginning with the last and ending with the first.’
When those who had started about five o’clock came,
each received the usual daily wage.
So when the first came, they thought that they would receive more,
but each of them also got the usual wage.
And on receiving it they grumbled against the landowner, saying,
‘These last ones worked only one hour,
and you have made them equal to us,
who bore the day’s burden and the heat.’
He said to one of them in reply,
‘My friend, I am not cheating you.
Did you not agree with me for the usual daily wage?
Take what is yours and go.
What if I wish to give this last one the same as you?
Or am I not free to do as I wish with my own money?
Are you envious because I am generous?’
Thus, the last will be first, and the first will be last.”

I. THEME: The true wisdom

Today readings emphasize God’s wisdom. In the first reading, Isaiah stresses God’s wisdom is above all human wisdom: “As high as the heavens are above the earth, so high are my ways above your ways and my thoughts above your thoughts.” In the second reading, St. Paul is ready to accept suffering and death, considered as absurd by the world, to preach the Good News. In the Gospel, Jesus gives an example to illustrate God’s generosity and mercy to all, especially those are in need.

1/ Reading I: God’s wisdom is high above all human wisdom.

The prophet Isaiah compares God’s wisdom with human wisdom in treating wicked people. According to human way: “An eye for an eye, a tooth for a tooth” (Exo 21:24; Lv 24:20). Those who killed innocent people must be killed; they cannot be forgiven. According to God’s way, He does not want wicked peoples to die, but want them to repent and to live.

Human beings have a tendency of analogous thinking, they use their way of thinking and standards to apply for God. Isaiah denounces this analogy by proclaiming God’s oracle: “My thoughts are not your thoughts, nor are your ways my ways, says the LORD.”

There exist not only differences, but many times they are also totally opposite between God’s and human wisdom. Isaiah gives an image to illustrate: “As high as the heavens are above the earth, so high are my ways above your ways and my thoughts above your thoughts.”

2/ Reading II: St. Paul’s wisdom, he wants to suffer and to die for the Good News.

Human beings used to avoid suffering and death, but Paul wants to suffer for the Good News and to hope for death to witness for Christ. There is a reason behind these behavior: To people who have no faith, death is the end; there is nothing after death. To St. Paul, death is a profit because he will be con-glorified with God in Christ.

Even Paul would like to die to come to God; but because of his eagerness to preach the Good News, he wants to live on to benefit for people. He is divided between to live and to die: “If I go on living in the flesh, that means fruitful labor for me. And I do not know which I shall choose.” Paul wants to live on to serve God’s people and to suffer for Christ, at the same time he wants to die so that he will be with Christ which is he is always looking for. Out of charity for people, he wants to remain in this world to help them.

Finally, he comes to a conclusion is that he does not have to worry to make a choice; but to put completely his faith in God’s providence. The reason for that is found in another place: “None of us lives to himself, and none of us dies to himself. If we live, we live to the Lord, and if we die, we die to the Lord; so then, whether we live or whether we die, we are the Lord’s.For to this end Christ died and lived again, that he might be Lord both of the dead and of the living” (Rom 14:7-9).

He advises the Philippians: As long as they live, they should not be worried about to live or to die; but live a worthy life of the Good News which they received. They must be firm in faith, have the same spirit, fight together to protect faith and the Good News.

3.1/ God’s mercy: He wants everyone to work for a living. There are some important things we must know in order to understand today Gospel.

– Workers for hire: They work depending on daily need. When there is no work, they have no money for living. They used to gather in public places such as, a market or a public square, so that owners are easily to recognize them.

– The daily wage is one denarius (about 8 dollars). This is a minimum amount for a family to live in a day.

– The harvest for grapes in Palestine is September. All grapes must be gathered before the raining season comes; if not, grapes will be destroyed by water. The owners of vineyards have an urgent need for workers, even though they can work only few hours a day.

Jesus compares the Kingdom of God as the landowner who went out at dawn to hire laborers for his vineyard. There are some were hired from the beginning of day; some were hired at the third, sixth, or ninth hour. Some were worked only one hour. The main point in this parable is that all were called to work, not only for few people. The ones who were hired late, not because they are lazy, but because no one hires them.

Such is also true for the Kingdom of God. There are those God chose them from the beginning as the Jewish people. There are some who got in when Jesus sent his disciples out to preach the Good News, likes the Syrians, Lebaneses, Turkeys. There are somes who got in because of the works of the missionaries, such as the Chineses, Vietnameses, Japaneses. Last, there are still some who were chosen before the Last Judgment.

3.3/ Human jealousy: Those who were hired from the beginning of day thought they will receive more than those who worked later. When they found out they also got the usual wage, they grumbled against the landowner, saying: “’These last ones worked only one hour, and you have made them equal to us, who bore the day’s burden and the heat.” In reply, the landowner said: “My friend, I am not cheating you. Did you not agree with me for the usual daily wage?
Take what is yours and go. What if I wish to give this last one the same as you? Or am I not free to do as I wish with my own money? Are you envious because I am generous?”

The landowner’s treatment must be a warning to disciples. They cannot demand priviledges because they are Jesus’ disciples from the beginning. It is also a warning to the Jews, they cannot despite Gentiles that they are not worthy to enter the Kingdom of God. It is also a warning to all of us, we cannot demand to be treated as special ones because we followed God more years or we worked for him harder. In the eyes of faith, a child who died when he just lived a fews day in the world can enter heaven as the elder who lived to 100 years old.

3.4/ What is the motivation when one works for God? If a man works for a wage or a reward, he already got the compensation when the receiver paid him a wage or a reward in this life. But if a man works because of his love for God and his people, he will be rewarded by God in the life to come. Those who worked from the beginning of a day, they made an agreement with the landowner; those who worked late, they obeyed the landowner’s command and relied completely in his generosity and mercy.

– We must always remember: Never apply human standards to God in our thinking, judging, or acting. If we want to acquire wisdom, there is no human wisdom can be compared to God. We must spend time to learn God’s wisdom through Scripture, in stead of spending time on human books of wisdom.

– To live is to live for God and for others; to die is to come to God. We should not fear even death to be a witness for Christ.

– We must have compassion and generosity as God in our treatment for human beings, not just only to be fair. We should not demand privileges because we come first, and also not jealous when others were given privileges.