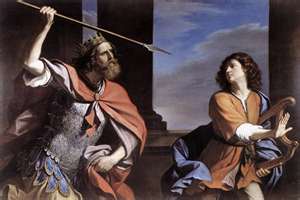 Saul took three thousand picked men from all Israel
and went in search of David and his men
in the direction of the wild goat crags.
When he came to the sheepfolds along the way, he found a cave,
which he entered to relieve himself.
David and his men were occupying the inmost recesses of the cave.

David’s servants said to him,
“This is the day of which the LORD said to you,
‘I will deliver your enemy into your grasp;
do with him as you see fit.'”
So David moved up and stealthily cut off an end of Saul’s mantle.
Afterward, however, David regretted that he had cut off
an end of Saul’s mantle.
He said to his men,
“The LORD forbid that I should do such a thing to my master,
the LORD’s anointed, as to lay a hand on him,
for he is the LORD’s anointed.”
With these words David restrained his men
and would not permit them to attack Saul.
Saul then left the cave and went on his way.
David also stepped out of the cave, calling to Saul,
“My lord the king!”
When Saul looked back, David bowed to the ground in homage and asked Saul:
“Why do you listen to those who say,
‘David is trying to harm you’?
You see for yourself today that the LORD just now delivered you
into my grasp in the cave.
I had some thought of killing you, but I took pity on you instead.
I decided, ‘I will not raise a hand against my lord,
for he is the LORD’s anointed and a father to me.’
Look here at this end of your mantle which I hold.
Since I cut off an end of your mantle and did not kill you,
see and be convinced that I plan no harm and no rebellion.
I have done you no wrong,
though you are hunting me down to take my life.
The LORD will judge between me and you,
and the LORD will exact justice from you in my case.
I shall not touch you.
The old proverb says, ‘From the wicked comes forth wickedness.’
So I will take no action against you.
Against whom are you on campaign, O king of Israel?
Whom are you pursuing? A dead dog, or a single flea!
The LORD will be the judge; he will decide between me and you.
May he see this, and take my part,
and grant me justice beyond your reach!”
When David finished saying these things to Saul, Saul answered,
“Is that your voice, my son David?”
And Saul wept aloud.
Saul then said to David: “You are in the right rather than I;
you have treated me generously, while I have done you harm.
Great is the generosity you showed me today,
when the LORD delivered me into your grasp
and you did not kill me.
For if a man meets his enemy, does he send him away unharmed?
May the LORD reward you generously for what you have done this day.
And now, I know that you shall surely be king
and that sovereignty over Israel shall come into your possession.”

Jesus went up the mountain and summoned those whom he wanted
and they came to him.
He appointed Twelve, whom he also named Apostles,
that they might be with him
and he might send them forth to preach
and to have authority to drive out demons:
He appointed the Twelve:
Simon, whom he named Peter;
James, son of Zebedee,
and John the brother of James, whom he named Boanerges,
that is, sons of thunder;
Andrew, Philip, Bartholomew,
Matthew, Thomas, James the son of Alphaeus;
Thaddeus, Simon the Cananean,
and Judas Iscariot who betrayed him.

I. THEME: One people’s goodwill can change others and the world.

People have a tendency to hold on to their glorious past and to deny changes in their present life. They forget that they can’t replay the past and humankind must improve everyday in every aspects of life. Vietnamese adages have many sayings that advise people to discard the conservative and the greedy of power attitude, such as: “the old generation shall come to an end and be replaced by the younger generation;” or “It is the sign of blessing if the son is better than his father.” In God’s plan of salvation, He didn’t create people perfectly or revealed everything to men from the beginning; but He wants people to gradually come to perfection or to have better knowledge about Him everyday. Therefore, human beings need to have wisdom and open mind to welcome changes in their life, not to hold on to the past.

Today readings concentrate on the need to have a goodwill and to accept changes for better. In the first reading, Saul wanted to kill David to hold on to his power even though the prophet Samuel already told him that God has dethroned him. Finally, David opened his eyes to recognize God’s will by refusing to kill him when he had the opportunity to do so. In the Gospel, Jesus chose twelve imperfect men to be his apostles. He trained them to be his successors to bring the Good News to all people on earth.

1/ Reading I: “You are more righteous than I; for you have repaid me good, whereas I have repaid you evil.”

1.1/ David’s reaction: David knew that Saul wanted to kill him because he was jealous and wanted to hold on to his power. He must constantly be on the run to protect his life. The opportunity came so that he could kill Saul at En-Gedi, near the Death Sea, when Saul entered a cave to do his personal thing while David and his companions happened to be at the other end in the same cave. The men of David said to him, “Here is the day of which the Lord said to you, “Behold, I will give your enemy into your hand, and you shall do to him as it shall seem good to you.”

David could let his companions kill Saul so that he shall no longer be hidden; but he was afraid to kill God’s anointed one. He forbade them to do anything bad to Saul; he only came to the place where Saul hung his coat and cut off a small piece from it. This act might be a symbol to remind Saul of the event he unintentionally tore the skirt of Samuel’s robe (cf. 1 Sam 15:27-28). After that, David came out of the cave and called out to Saul: “My lord the king!” And when Saul looked behind him, David bowed with his face to the earth, and did obeisance.David said to Saul, “Why do you listen to the words of men who say, `Behold, David seeks your hurt’?Lo, this day your eyes have seen how the Lord gave you today into my hand in the cave; and some bade me kill you, but I spared you. I said, `I will not put forth my hand against my lord; for he is the Lord’s anointed.’See, my father, see the skirt of your robe in my hand; for by the fact that I cut off the skirt of your robe, and did not kill you, you may know and see that there is no wrong or treason in my hands. I have not sinned against you, though you hunt my life to take it.”

1.2/ Saul’s reaction: David’s goodwill completely changed Saul’s attitude to him. When David finished his discourse, Saul lifted up his voice and wept.He said to David, “You are more righteous than I; for you have repaid me good, whereas I have repaid you evil.And you have declared this day how you have dealt well with me, in that you did not kill me when the Lord put me into your hands.For if a man finds his enemy, will he let him go away safe? So may the Lord reward you with good for what you have done to me this day.” The righteous correctly lives his relationship with other though other didn’t live accordingly. Saul also recognized that David is a worthy man to be the king of Israel. He congratulated David: “Behold, I know that you shall surely be king, and that the kingdom of Israel shall be established in your hand.”

2/ Gospel: Jesus chose twelve imperfect men to train them to be his apostles.

2.1/ The mission of the Twelve: Why did Jesus form the Twelve?

(1) To continue his mission of preaching the Good News: Jesus knew well what shall happen to him in the near future; therefore, he needed to train someone to continue his mission on earth. The good leader is the one who can foresee future and train people to replace him. If he doesn’t, no matter how good is his mission, sooner or later his good ideas shall be passed.

(3) To train them to be his witnessess for people: The most effective way to train disciples is to let them live with the master. The disciples have many opportunities to learn from their master, not only wisdom and knowledge but also his manner. It is also good for the master to observe his disciples and to correct their bad habits.

2.2/ The members of the Twelve: Looking into the list of the Twelve, one might have the following observations:

(1) None was stand-out based on fame, power or knowledge. In opposition, the majority of them are fishermen. This shows God’s power working in them. Jesus can train these men to be his faithful witnesses and preachers to transform the world.

(2) All were sinners and had many shortcomings: Matthew was a tax-collector and regarded as public and permanent sinner. Judah Iscariot was the one who shall betray him. Two Zebedee’s sons, James and John, were those who wanted to be “one on the right and one on the left of Jesus” when he became a king. Peter denied Jesus three times on his Passion. Most of the apostles ran away from him when he died on the cross. These facts show us that the training of people isn’t easy.

(3) Their temperaments were very different: Simon belonged to the group called Zealots. These people hated those who were allied with foreigners to exploit their own people as Matthew, the tax-collector. Jesus chose both and let them live together. They must endure each other for the common purpose of preaching the Good News. Peter who was very quick to talk must live with John, a thinker.

– In God’s providence, He didn’t create everything perfect from the beginning, but they gradually become perfect. He wanted us not to hold on to the past, but learn from them and go forward to the future. We must use our intellect and open our mind to welcome new revelation; and make an effort to become better everyday.

– Jealousy and selfishness are two reasons that prevent our advance. We should not let them prevent us to recognize God’s will, to destroy the truth, and to kill the innocent.