Home » Saints Basil the Great and Gregory of Nazianzen, Bishops and Doctors of the Church 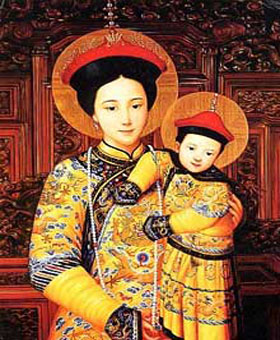 Let what you heard from the beginning remain in you.
If what you heard from the beginning remains in you,
then you will remain in the Son and in the Father.
And this is the promise that he made us: eternal life.
I write you these things about those who would deceive you.
As for you,
the anointing that you received from him remains in you,
so that you do not need anyone to teach you.
But his anointing teaches you about everything and is true and not false;
just as it taught you, remain in him.

And now, children, remain in him,
so that when he appears we may have confidence
and not be put to shame by him at his coming.

This is the testimony of John.
When the Jews from Jerusalem sent priests and Levites to him
to ask him, “Who are you?”
He admitted and did not deny it, but admitted,
“I am not the Christ.”
So they asked him,
“What are you then? Are you Elijah?”
And he said, “I am not.”
“Are you the Prophet?”
He answered, “No.”
So they said to him,
“Who are you, so we can give an answer to those who sent us?
What do you have to say for yourself?”
He said:
“I am the voice of one crying out in the desert,
‘Make straight the way of the Lord,’
as Isaiah the prophet said.”
Some Pharisees were also sent.
They asked him,
“Why then do you baptize
if you are not the Christ or Elijah or the Prophet?”
John answered them,
“I baptize with water;
but there is one among you whom you do not recognize,
the one who is coming after me,
whose sandal strap I am not worthy to untie.”
This happened in Bethany across the Jordan,
where John was baptizing.

I. THEME: Truth and lying

In reality, it is very difficult to know the true character of a person through a conversation because of the following reasons: When talking about oneself, a person has a tendency to pretend to be someone whom he isn’t; he can exaggerate what he has done; or he can hide himself so that others will not recognize his true identity. When we must find out something from that person through others, the others have a tendency to decrease his good works and virtues so that he doesn’t look too good; or they can add their criticism to decrease his goodness; or add more on his bad things which he didn’t have; or they talk about his family’s bad deeds.

Today readings taught us to be honest with ourselves. In the first reading, St. John gave us the reason why we must be true to ourselves because we received the Holy Spirit’s anointing in Baptism. The Holy Spirit helps us to live according to the truth and to recognize lyings in the world. In the Gospel, John Baptist gave us an exemplar of living according to the truth by his answers tho those who investigated him. His answers are brief, either yes or no; directly, not circular nor lengthy; simple, not using of a word which has many meanings; concise, he stated what he is, not what others call or praise him. When he must compare himself with Jesus, he humbly confessed: “even he who comes after me, the thong of whose sandal I am not worthy to untie.”

1/ Reading I: Christianity and other religions

1.1/ Antichrists are those who don’t believe in Christ: Many religions in the world worship the one God; for example, Jewish religion or Islamic religion. Christianity worships God and Christ.

(2) The Holy Spirit’s enlightenment: When a person is baptized in the name of Christ, he is anointed by the Holy Spirit and conferred to be a priest, a prophet and a king. St. John confirmed: “but the anointing which you received from him abides in you, and you have no need that any one should teach you; as his anointing teaches you about everything, and is true, and is no lie, just as it has taught you, abide in him.” The Gnosticists believe that only they know how to liberate people from material to unite with God; St. John opposed them by teaching: when a Christian has God’s Spirit, the spirit of truth, he has no need to be taught by anyone.

2.1/ What John Baptist aren’t: St. John reported the John Batist’s testimony to the Jews from Jerusalem: “When the Jews sent priests and Levites from Jerusalem to ask him, “Who are you?” He confessed, he did not deny, but confessed, “I am not the Christ.” And they asked him, “What then? Are you Elijah?” He said, “I am not.” “Are you the prophet?” And he answered, “No.”” The reason why John Baptist gave such answers because he wasn’t concerned with what others said about him, but only what he truly is. Many people regarded him as the prophet, and Jesus also regarded him as the most important prophet of all prophets.

2.2/ What John Baptist are: “They said to him then, “Who are you? Let us have an answer for those who sent us. What do you say about yourself?” He said, “I am the voice of one crying in the wilderness, `Make straight the way of the Lord,’ as the prophet Isaiah said.”” Once John Baptist recognizes his vocation in life, he used all of his time and effort to fulfill his duty.

Now they had been sent from the Pharisees. They asked him, “Then why are you baptizing, if you are neither the Christ, nor Elijah, nor the prophet?” John answered them, “I baptize with water; but among you stands one whom you do not know, even he who comes after me, the thong of whose sandal I am not worthy to untie.” In other place, John Baptist differentiated between two baptism: his baptism is for repentance while Christ’s baptism is for receiving the forgiveness of sins and the Holy Spirit.

– We need to know ourselves, God and others.

– We shouldn’t pretend to be whom we aren’t; nor take others’ good work as ours; but to speak, to live and to witness for the truth.

– We must be cautious of the antichrists and those who didn’t live deservedly with their Christian names.