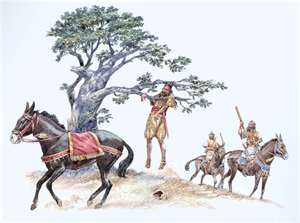 Absalom unexpectedly came up against David’s servants.
He was mounted on a mule,
and, as the mule passed under the branches of a large terebinth,
his hair caught fast in the tree.
He hung between heaven and earth
while the mule he had been riding ran off.
Someone saw this and reported to Joab
that he had seen Absalom hanging from a terebinth.
And taking three pikes in hand,
he thrust for the heart of Absalom,
still hanging from the tree alive.

Now David was sitting between the two gates,
and a lookout went up to the roof of the gate above the city wall,
where he looked about and saw a man running all alone.
The lookout shouted to inform the king, who said,
“If he is alone, he has good news to report.”
The king said, “Step aside and remain in attendance here.”
So he stepped aside and remained there.
When the Cushite messenger came in, he said,
“Let my lord the king receive the good news
that this day the LORD has taken your part,
freeing you from the grasp of all who rebelled against you.”
But the king asked the Cushite, “Is young Absalom safe?”
The Cushite replied, “May the enemies of my lord the king
and all who rebel against you with evil intent
be as that young man!”

The king was shaken,
and went up to the room over the city gate to weep.
He said as he wept,
“My son Absalom! My son, my son Absalom!
If only I had died instead of you,
Absalom, my son, my son!”

When Jesus had crossed again in the boat
to the other side,
a large crowd gathered around him, and he stayed close to the sea.
One of the synagogue officials, named Jairus, came forward.
Seeing him he fell at his feet and pleaded earnestly with him, saying,
“My daughter is at the point of death.
Please, come lay your hands on her
that she may get well and live.”
He went off with him
and a large crowd followed him.

There was a woman afflicted with hemorrhages for twelve years.
She had suffered greatly at the hands of many doctors
and had spent all that she had.
Yet she was not helped but only grew worse.
She had heard about Jesus and came up behind him in the crowd
and touched his cloak.
She said, “If I but touch his clothes, I shall be cured.”
Immediately her flow of blood dried up.
She felt in her body that she was healed of her affliction.
Jesus, aware at once that power had gone out from him,
turned around in the crowd and asked, “Who has touched my clothes?”
But his disciples said to him,
“You see how the crowd is pressing upon you,
and yet you ask, Who touched me?”
And he looked around to see who had done it.
The woman, realizing what had happened to her,
approached in fear and trembling.
She fell down before Jesus and told him the whole truth.
He said to her, “Daughter, your faith has saved you.
Go in peace and be cured of your affliction.”

While he was still speaking,
people from the synagogue official’s house arrived and said,
“Your daughter has died; why trouble the teacher any longer?”
Disregarding the message that was reported,
Jesus said to the synagogue official,
“Do not be afraid; just have faith.”
He did not allow anyone to accompany him inside
except Peter, James, and John, the brother of James.
When they arrived at the house of the synagogue official,
he caught sight of a commotion,
people weeping and wailing loudly.
So he went in and said to them,
“Why this commotion and weeping?
The child is not dead but asleep.”
And they ridiculed him.
Then he put them all out.
He took along the child’s father and mother
and those who were with him
and entered the room where the child was.
He took the child by the hand and said to her, “Talitha koum,”
which means, “Little girl, I say to you, arise!”
The girl, a child of twelve, arose immediately and walked around.
At that they were utterly astounded.
He gave strict orders that no one should know this
and said that she should be given something to eat.

I. THEME: The power of faith

People are very practical and realistic, in order for them to pay attention to or to do something, that thing must benefit them in some ways. Similarly in the area of faith, many people don’t pay attention to it because they think that faith doesn’t do anything for them. Today readings show people some important dimensions of faith; however, there are much more important dimensions than that, as someone correctly said: “People can’t live without faith.”

In the first reading, although king David has lost his third children and endured many sufferings through God’s providence, he still trusted in God and didn’t commit blasphemy against Him; because he knew all these sufferings were God’s punishments for his two serious sins. In the Gospel, St. Mark reported two miracles due to people’s faith in Jesus: First, a woman who had had a flow of blood for twelve years. She thought: “If I touch even his garments, I shall be made well.” She approached Jesus from behind and touched his cloak, and immediately the hemorrhage ceased; and she felt in her body that she was healed of her disease. Secondly, the daughter of Jairus, the head of a synagogue, was sick to the point of death. Jairus came to Jesus and begged him to come to his house to heal his daughter. Jesus came and made her alive.

1.1/ Absalom was killed by Joab, David’s commander-in chief: Under human eyes, Absalom was a bat hieu and betrayed son. He committed murder when he killed Amnon, his half brother, because Amnon raped Tamar, his sister. He also committed incest when he had relations with his father’s concubines during the day and in front of many people. He committed betrayed because he devised a plan to kill his father and to take his throne. He was on the way to chase after David’s armies and was caught by a tree, and hung up between that tree and the ground.

When a David’s soldier saw him, he ran to Joab, David’s commander-in chief. Joab took three darts in his hand, and thrust them into the heart of Absalom, while he was still alive in the oak. Joab thought he did for king David a big favor because Absalom shall no longer cause any more trouble for him. He sent his soldier to announce the good new for David and thought David shall be joyful to hear it.

1.2/ King David wept for Absalom, his son: There was only two persons who knew the reason of all troubles caused by Absalom were David and the prophet Nathan. King David knew the reason of Absalom’s death is his sins. Therefore, when he heard the new of Absalom’s death; instead of being joyful as Joab and soldiers thought, he was deeply moved and went up to the chamber over the gate, and wept. As he went, he cried out, “O my son Absalom, my son, my son Absalom! Would I had died instead of you, O Absalom, my son, my son!”

So the victory that day was turned into mourning for all the people; for the people heard: “The king is grieving for his son.”

This is the third son king David has lost due to his sins: the first is Bathsheba’s son; the second is Amnon; and the third is Absalom. Though David was severely punished by God, he didn’t complain any word against him; for he thought he was deserved all these sufferings. He wanted to die in the place of his sons because he was the one that committed sins; but God has a plan and David must obey it. If David didn’t have a strong faith in God, how could he overcome these sufferings and still believe in God?

2/ Gospel: “Daughter, your faith has made you well; go in peace, and be healed of your disease.”

2.1/ The ruler of a synagogue asked Jesus to come to his house and to heal his daughter: The title, “the ruler of a synagogue,” told his authority and honor. Through many conflicts between Jesus and the Jews, he can be the person that avoids or has confliction with Jesus. In opposition, according to today’s report, he fell at his feet, and besought him, saying, “My little daughter is at the point of death. Come and lay your hands on her, so that she may be made well, and live.” When Jesus saw his sincere expression of faith, he agreed to go to his house, and a great crowd followed him.

2.2/ Faith can heal a terminate disease: When Jesus was on his way to Jairus’ house, an other miracle was happened. “There was a woman who had had a flow of blood for twelve years, and who had suffered much under many physicians, and had spent all that she had, and was no better but rather grew worse. She had heard the reports about Jesus, and came up behind him in the crowd and touched his garment. For she said, “If I touch even his garments, I shall be made well.”” She did so, and immediately her hemorrhage ceased; and she felt in her body that she was healed of her disease.

There were only two persons who knew what have happened are Jesus and the woman. Jesus’ disciples couldn’t understand why Jesus said “Who touched me?” They said to him, “You see the crowd pressing around you, and yet you say that?” Jesus knew what he was doing, and he looked around to see who had done it. At that moment, the woman, knowing what had been done to her, came in fear and trembling and fell down before him, and told him the whole truth. Jesus said to her, “Daughter, your faith has made you well; go in peace, and be healed of your disease.”

2.3/ Faith helped Jairus daughter to live again: While Jesus was still speaking, there came from the ruler’s house some who said, “Your daughter is dead. Why trouble the Teacher any further?” Ignoring what they said, Jesus said to the ruler of the synagogue, “Do not fear, only believe.”

There are at least three times in the Gospel, the evangelists reported Jesus resurrected the death: in today report; the son of the widow in Nain (Lk 7:11), and Lazarus (Jn 11). People who witnessed these miracles were in great amazement; because they never saw anything like them before. In Lazarus’ resurrection, Jesus emphasized the necessary of faith to Martha: “I am the resurrection and the life; he who believes in me, though he die, yet shall he live,  and whoever lives and believes in me shall never die” (Jn 11:25-26).

– Faith helps us to be faithful to God in this life on earth. Without the faith, we can easily fall to desperation when we face great sufferings of our life.

– Sins cause many terrible results for individual, family and society. We should learn what happened to David, his family and the nation, to resist sins and to avoid temptations.

– Faith helps us to live. If we have a strong faith in God, nothing in this life can prevent us to come to God. Death is just temporal; once we overcome that, we shall live with for ever.