Home » Memorial of Saint Thomas Aquinas, priest and doctor of the Church 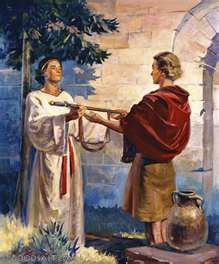 The LORD sent Nathan to David, and when he came to him,
Nathan said: “Judge this case for me!
In a certain town there were two men, one rich, the other poor.
The rich man had flocks and herds in great numbers.
But the poor man had nothing at all
except one little ewe lamb that he had bought.
He nourished her, and she grew up with him and his children.
She shared the little food he had
and drank from his cup and slept in his bosom.
She was like a daughter to him.
Now, the rich man received a visitor,
but he would not take from his own flocks and herds
to prepare a meal for the wayfarer who had come to him.
Instead he took the poor man’s ewe lamb
and made a meal of it for his visitor.”
David grew very angry with that man and said to him:
“As the LORD lives, the man who has done this merits death!
He shall restore the ewe lamb fourfold
because he has done this and has had no pity.”

Then Nathan said to David: “You are the man!
Thus says the LORD God of Israel:
‘The sword shall never depart from your house,
because you have despised me
and have taken the wife of Uriah to be your wife.’
Thus says the LORD:
‘I will bring evil upon you out of your own house.
I will take your wives while you live to see it,
and will give them to your neighbor.
He shall lie with your wives in broad daylight.
You have done this deed in secret,
but I will bring it about in the presence of all Israel,
and with the sun looking down.'”

Then David said to Nathan, “I have sinned against the LORD.”
Nathan answered David: “The LORD on his part has forgiven your sin:
you shall not die.
But since you have utterly spurned the LORD by this deed,
the child born to you must surely die.”
Then Nathan returned to his house.

The LORD struck the child that the wife of Uriah had borne to David,
and it became desperately ill.
David besought God for the child.
He kept a fast, retiring for the night
to lie on the ground clothed in sackcloth.
The elders of his house stood beside him
urging him to rise from the ground; but he would not,
nor would he take food with them.

On that day, as evening drew on, Jesus said to his disciples:
“Let us cross to the other side.”
Leaving the crowd, they took Jesus with them in the boat just as he was.
And other boats were with him.
A violent squall came up and waves were breaking over the boat,
so that it was already filling up.
Jesus was in the stern, asleep on a cushion.
They woke him and said to him,
“Teacher, do you not care that we are perishing?”
He woke up,
rebuked the wind,
and said to the sea, “Quiet! Be still!”
The wind ceased and there was great calm.
Then he asked them, “Why are you terrified?
Do you not yet have faith?”
They were filled with great awe and said to one another,
“Who then is this whom even wind and sea obey?”

I. THEME: Faith helps us to overcome crises in life.

Many people, including the faithful, think faith have no role in their life; therefore, they didn’t pay attention to strengthen their faith in God. These people shall open their eyes and see how importance of faith when they must face crises in life, such as: terminated diseases, divorce, unemployment, accidents and death. To the one who has strong faith, he can easily overcome these crises. To the one who has not, what shall he rely on?

Today readings show us the importance of faith when people must face crises in their life. In the first reading, the prophet Nathan was sent by God to correct king David and to pronounce the punishments. Nathan used a very clever way to help David to recognize his sins. David recognized how serious were his sins; but he trusted in God’s mercy because he had a very strong faith in God. Without this faith, David probably felt in despair. In the Gospel, though the apostles were taught and seen what Jesus has done before their eyes, they paid no attention to how to strengthen their faith. Even though they were having Jesus with them in their boat, they were still afraid of a fierce storm.

1.1/ Nathan’s clever way to correct king David: To do fraternal correction to a brother or a sister is a tough task; to do this to a king is much harder because the one who does the correction may loose his life. In today passage, the Lord sent the prophet Nathan to correct king David. Nathan used a very clever way to correct him; he wanted David to recognize other’s sin and to proclaim the sentence for that person before he pointed his finger to David and said: “You are the man.”

The audience can recognize right way three main characters in Nathan’s make-up story: The rich man is king David. He had many wives and concubines; he can satisfy his desire with them. The poor man is Uriah, he had only one wife which is Bathsheba, and she is very dear to him. The question Nathan wanted David to think is why didn’t you satisfy your sexual desire with any of your wives or concubines instead of with Bathsheba, Uriah’s only wife? Not only that but also why did you kill Uriah, your commander, by sending him to the forefront of the hardest fighting, and then draw back from him, that he may be struck down, and die?

It is very easy to condemn other’s sin. This is why David’s anger was greatly kindled against the man; and he said to Nathan, “As the Lord lives, the man who has done this deserves to die; and he shall restore the lamb fourfold, because he did this thing, and because he had no pity.”

1.2/ The three terrible punishments shall fall upon David’s family.

(1) Death shall happen in his family: Nathan said to David: “Now therefore the sword shall never depart from your house, because you have despised me, and have taken the wife of Uriah the Hittite to be your wife.” This punishment was actualized when Absalom killed Amnon who raped Tamar, his sister; and David didn’t do anything about it (2 Sam 13:32), Absalom persecuted David, his father, and was hung on the tree when he was on his way to persecute David (2 Sam 18:33).

(2) Rape shall happen to David’s concubines in public: Nathan continued: “Behold, I will raise up evil against you out of your own house; and I will take your wives before your eyes, and give them to your neighbor, and he shall lie with your wives in the sight of this sun. For you did it secretly; but I will do this thing before all Israel, and before the sun.” This punishment was actualized when Absalom raped David’s concubines in the sight of all Israelites (2 Sam 16:21-22).

(3) The child whom Bathsheba was bearing shall die: Finally, Nathan said to David: “Nevertheless, because by this deed you have utterly scorned the Lord, the child that is born to you shall die.” This sentence was actualized in few verses later (2 Sam 12:19-20).

As an animal was hit by an arrow, David couldn’t hide his sins from God; he confessed to Nathan: “I have sinned against the Lord.” And Nathan said to David, “The Lord also has put away your sin; you shall not die.” We can clearly see here that God forgave David’s sins; but he must endure all consequences of his sins. However, through all these terrible punishments, David trusted in God’s mercy and was in deep repentance the rest of his life.

According to Mark’s report: “On that day, when evening had come, he said to them, “Let us go across to the other side.” And leaving the crowd, they took him with them in the boat, just as he was. And other boats were with him. And a great storm of wind arose, and the waves beat into the boat, so that the boat was already filling.” Facing the storm, we saw two different attitudes:

2.1/ The disciples’ attitude: They were afraid of death; therefore, they woke up Jesus and said to him: “Teacher, do you not care if we perish?” We don’t know how many miracles Jesus has done before their eyes, but one thing we know for certain they weren’t enough for them to completely put their trust in him. In the Gospel according to John, chapter 6, after Jesus multiplied five loaves and two fishes for five thousands men to eat, he walked on water to come to them when their boat was threatened by a fierce storm; they thought he is a ghost. When God commanded the storm to be quiet, they said to each other: “Who then is this, that even wind and sea obey him?”

2.2/ Jesus’ attitude was completely opposite to his disciples’ attitude; while his disciples were fighting with the storm, Jesus was in the stern, asleep on the cushion. The disciples couldn’t understand why a person can be in such a deep sleep during such a fierce storm! When they woke him and said to him, “Teacher, do you not care if we perish?” And he awoke and rebuked the wind, and said to the sea, “Peace! Be still!” And the wind ceased, and there was a great calm. He said to them, “Why are you afraid? Have you no faith?”

– Faith in God is critical for our life. When we are still young and healthy, we must do all we can to strengthen our faith before we shall be tested by God.

– Once we have a strong faith, no obstacles in life can shake our faith. When we are facing obstalces, that is the opportunity for us to live our faith.

– Faith must be expressed in action. We must believe and live according to what Jesus has taught us.