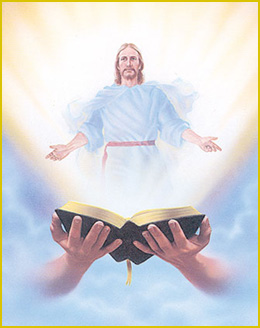 1/ Reading I: RSV Sirach 1:1 All wisdom comes from the Lord and is with him forever. 2 The sand of the sea, the drops of rain, and the days of eternity — who can count them? 3 The height of heaven, the breadth of the earth, the abyss, and wisdom — who can search them out? 4 Wisdom was created before all things, and prudent understanding from eternity. 5 The root of wisdom — to whom has it been revealed? Her clever devices — who knows them? 6 There is One who is wise, greatly to be feared, sitting upon his throne. 7 The Lord himself created wisdom; he saw her and apportioned her, he poured her out upon all his works. 8 She dwells with all flesh according to his gift, and he supplied her to those who love him. 9 The fear of the Lord is glory and exultation, and gladness and a crown of rejoicing. 10 The fear of the Lord delights the heart, and gives gladness and joy and long life.

2/ Gospel: NAU Mark 9:14 When they came back to the disciples, they saw a large crowd around them, and some scribes arguing with them. 15 Immediately, when the entire crowd saw Him, they were amazed and began running up to greet Him. 16 And He asked them, “What are you discussing with them?” 17 And one of the crowd answered Him, “Teacher, I brought You my son, possessed with a spirit which makes him mute; 18 and whenever it seizes him, it slams him to the ground and he foams at the mouth, and grinds his teeth and stiffens out. I told your disciples to cast it out, and they could not do it.” 19 And He answered them and said, “O unbelieving generation, how long shall I be with you? How long shall I put up with you? Bring him to Me!” 20 They brought the boy to Him. When he saw Him, immediately the spirit threw him into a convulsion, and falling to the ground, he began rolling around and foaming at the mouth. 21 And He asked his father, “How long has this been happening to him?” And he said, “From childhood. 22 “It has often thrown him both into the fire and into the water to destroy him. But if you can do anything, take pity on us and help us!” 23 And Jesus said to him, “‘If you can?’ All things are possible to him who believes.” 24 Immediately the boy’s father cried out and said, “I do believe; help my unbelief.” 25 When Jesus saw that a crowd was rapidly gathering, He rebuked the unclean spirit, saying to it, “You deaf and mute spirit, I command you, come out of him and do not enter him again.” 26 After crying out and throwing him into terrible convulsions, it came out; and the boy became so much like a corpse that most of them said, “He is dead!” 27 But Jesus took him by the hand and raised him; and he got up. 28 When He came into the house, His disciples began questioning Him privately, “Why could we not drive it out?” 29 And He said to them, “This kind cannot come out by anything but prayer.”

I. THEME: The power of prayer

People are wise when solving problems related to nations, corporations or communities; they gather together to discuss, to set the long and short term goals and to divide tasks for each member. It is due to such wisdom, they are successful in the works they do.

We also have to make many individual decisions in our life, but we rarely discuss our problems with the wise and the expeienced, especially with God, the most wise who creates and controls all things in this universe. It is no surprised that we often fail in what we set out to do.

To pray is to discuss with God, to ask for His wisdom in solving our problems. Jesus is the example for us to imitate. He is God’s wisdom but he never did anythings without consulting his Father in advance; for examples: the Baptism, before choosing the Twelve, before his Passion on the Ghetsemane Garden and before the beginning of a new day.

Today readings show us the power of prayer. In the first reading, the author of the Book of Sirach confirms that all wisdom are originated from God before He creates, controls and brings all things to their ends. In the Gospel, Jesus let his disciples to know that the reason why they couldn’t expel a dumb devil out of the child is because they didn’t pray.

1/ Reading I: The origin of all wisdom

1.2/ The Word, Christ, is God’s wisdom: The author continues, “Wisdom was created before all things, and synesis (insight) understanding from eternity.” The RSV’s translation of synesis as “prudence” isn’t correct. Synesis is the clear understanding both inside and outside of a thing as it is; i.e. the designer of a computer knows how it is built and it is used for. The author said, “Wisdom was created before all things.” The tradition identified God’s “wisdom” with His Word—when God thinks of anything; it is existed. St. John, in chapter 1 of his Gospel called Christ is the Word. He existed before all things and because of him, everything is created.

1.3/ God gives His wisdom to all who loves her: In the Book of Genesis, the author described when God wants to create human beings, he said, “Let Us make man in Our image, according to Our likeness; and let them rule over the fish of the sea and over the birds of the sky and over the cattle and over all the earth, and over every creeping thing that creeps on the earth” (Gen 1:26). One of the trace which human beings is liked God is wisdom; since people must have God’s wisdom in order to control the world for God.

However, God’s wisdom in us isn’t uniform; whoever loves and treasures wisdom more, God shall gives that one more wisdom; for example, in Solomon’s case. In order to have wisdom, one must pray and ask God for it.

2/ Gospel: “This kind cannot be driven out by anything but prayer.”

2.1/ The disciples couldn’t expel a dumb spirit: The power of expelling evil spirits came from God, and Jesus has bestowed on his disciples this power. Why couldn’t they expel this dumb spirit? We know for certain that the power of expelling evil spirits is based on God’s, not on human power, because the power of evil spirit is stronger than human power. But God’s power in man comes from his faith in God. Jesus himself reminded this point to his disciples many times; for example, “For truly, I say to you, if you have faith as a grain of mustard seed, you will say to this mountain, `Move from here to there,’ and it will move; and nothing will be impossible to you” (Mt 17:20). Therefore, their weak faith is the reason why they couldn’t expel the dumb spirit. This reason is strengthened by Jesus’ cry out: “O faithless generation, how long am I to be with you? How long am I to bear with you? Bring him to me.”

2.2/ Everything are possible with the one who trusts in God: When Jesus asked the father, “How long has he had this?” He said, “From childhood. And it has often cast him into the fire and into the water, to destroy him; but if you can do anything, have pity on us and help us.” Hearing his answer, Jesus said to him, “If you can! All things are possible to him who believes.” Recognizing what Jesus is meant, the father of the child immediately cried out and said, “I believe; help my unbelief!” To recognize one’s weak faith as the father is a humble and wise act before one asks God to bestow His wisdom and to strengthen one’s faith. The stubborn didn’t recognize his weakness, how can he recognize what he needs to do to solve his problem?

When Jesus saw that a crowd came running together, he rebuked the unclean spirit, saying to it, “You dumb and deaf spirit, I command you, come out of him, and never enter him again.” And after crying out and convulsing him terribly, it came out, and the boy was like a corpse; so that most of them said, “He is dead.” But Jesus took him by the hand and lifted him up, and he arose.

If they prayed to God, He shall reveal to them what they need to do. But if they don’t pray and believe only in their power, they shall never win over devil’s power because they are much stronger than them. This is the reason why we see in the expelling formula, the one who wants to expel must start with, “In the name of Jesus Christ, the Son of God, I command you to get out of this person.”

– God is wise and controls everything in this world. We must pray to Him to ask for His counsel daily, especially when we must make important decisions.

– The evil spirit’s power is only less than God but stronger than human power. What they always try to tempt us is to rely on our power and don’t pray to God.

– When we see that we are lacking of wisdom and faith, we should humbly pray to God so He shall bestow on us more faith and wisdom.