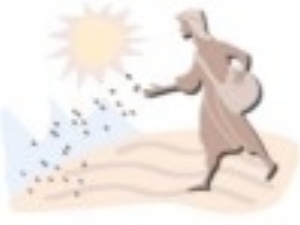 Beloved: I charge you before God, who gives life to all things, and before Christ Jesus,
who gave testimony under Pontius Pilatefor the noble confession,
to keep the commandment without stain or reproach
until the appearance of our Lord Jesus Christ
that the blessed and only rulerwill make manifest at the proper time,
the King of kings and Lord of lords,

who alone has immortality, who dwells in unapproachable light, and whom no human being has seen or can see.
To him be honor and eternal power. Amen.

When a large crowd gathered, with people from one town after another journeying to Jesus, he spoke in a parable.
“A sower went out to sow his seed.
And as he sowed, some seed fell on the path and was trampled,
and the birds of the sky ate it up.
Some seed fell on rocky ground, and when it grew, it withered for lack of moisture.
Some seed fell among thorns, and the thorns grew with it and choked it.
And some seed fell on good soil, and when it grew, it produced fruit a hundredfold.”
After saying this, he called out, “Whoever has ears to hear ought to hear.”
Then his disciples asked him what the meaning of this parable might be.
He answered,”Knowledge of the mysteries of the Kingdom of God has been granted to you;

but to the rest, they are made known through parables
so that they may look but not see, and hear but not understand.
“This is the meaning of the parable. The seed is the word of God.
Those on the path are the ones who have heard, but the Devil comes and takes away the word from their hearts that they may not believe and be saved.
Those on rocky ground are the ones who, when they hear, receive the word with joy, but they have no root; they believe only for a time and fall away in time of temptation.
As for the seed that fell among thorns,they are the ones who have heard, but as they go along,
they are choked by the anxieties and riches and pleasures of life,

and they fail to produce mature fruit.
But as for the seed that fell on rich soil, they are the ones who, when they have heard the word,
embrace it with a generous and good heart, and bear fruit through perseverance.”

I. THEME: To believe in God means to practice what He teaches.

Believing in one thing and doing is another thing; is like one studies, but never practices. Such a faith will not help the one who possesses it both in this life and the life to come. In this life, one can never bear fruit; in the next life, one will not live a happy life with God. If one believes and practices God’s words, that one will bear fruit in this life, such as, a strong faith in God, a happy and joyful life, a peaceful mind, a lovable life with all; and will live a happy life with God to eternity.

Today readings advice all Christians must put in practice what they believe and proclaim. In the first reading, St. Paul reminds Timothy what he has professed in God. Paul’s intention is to help Timothy to keep carefully what God commands in order to achieve what God promises in the next life. In the Gospel, Jesus uses the parable of the sower to remind his disciples that they must respect and practice God’s word in their life. If they do that, they will bear plenty of fruits.

1/ Reading I: Christ is the king and the Lord.

(1) Christ’s profession before Pilate : In Jesus’ Passion, he was brought to Pontius Pilate to be judged. The Jews must find a right reason in order for Pilate to condemn Jesus; the religious reason is not enough to condemn him. The Jews gathered themselves and then they accused Jesus with Pilate: “This person has called himself a king. Whoever calls himself a king, he is against Caesar.”

Therefore, Pilate asked Jesus: “Are you the king of Jews?” Jesus answered: “You have said so.” (Mk 15:3). The Jews did not want to accept Jesus as their king and Lord; but that is God’s plan. Jesus will be the king, not only to govern the Jews, but also all the people. However, Jesus explained the way he governs people in the Fourth Gospel: “You say that I am a king. For this I was born, and for this I have come into the world, to bear witness to the truth. Every one who is of the truth hears my voice.” This title was put on the cross by Pilate’s command in three languages: Latin, Hebrew, and Greek, even though the Jews protested that.

(2) Timothy’s proclamation when he was baptized and when he was ordained as a episcopos: Timothy has professed Christ is his king and Lord, as Jesus professed he is the king before Pilate. Christians must believe and profess that in order to be saved and to inherit the eternal life (Rom 10:9, Phi 2:11).

1.2/ What one must do in the present life: One must practice what one has professed. Paul commanded Timothy: “to keep the commandment without stain or reproach until the appearance of our Lord Jesus Christ.” In like manner, when a Christian professed that Christ is his king and Lord, he must keep carefully what he commands.

1.3/ What will happen in the future: Behind Christ’s proclamation before Pilate and Christians’ proclamation in Christ is God, who will show the ultimate position of Christ in the proper time: He is “the King of kings and Lord of lords, who alone has immortality, who dwells in unapproachable light, and whom no human being has seen or can see. To him be honor and eternal power. Amen.”

2/ Gospel: All Christians must love and practice God’s words.

2.1/ Jesus tells people the parable of a sower: There is a man who goes out to sow his seeds. During his sowing, there are four cases that can happen.

(1) There are some seeds that fell on the path and was trampled, and the birds of the sky ate it up.
(2) Some seed fell on rocky ground, and when it grew, it withered for lack of moisture.

(3) Some seed fell among thorns, and the thorns grew with it and choked it.

(4) And some seed fell on good soil, and when it grew, it produced fruit a hundredfold.

After finish talking, he calls out: “Whoever has ears to hear ought to hear.”

2.2/ Jesus explains the parable for his disciples: Two important things Jesus points out: First, the seeds are God’s words. Second, the place which the seeds fell into is people’s mind.

(2) The seeds that fell on stony ground are the ones who welcomed God’s words at the beginning; but they don’t let God’s word permeate their souls. This is why they cannot overcome trials and sufferings. They don’t practice what God taught them in order to strengthen their faith.

(3) The seeds that fell into throny bush are those who heard God’s words but they don’t give God’s words an ultimate importance place and don’t put God’s words into practice. They are worried themselves with worldly glory and sensual pleasure. These are reasons that God’s words cannot grow and bear fruit.

(4) The seeds that fell on good soil are the ones who prepared, welcomed, meditated, and practiced God’s words. Depending on how much effort they put out, they will gather that many fruits. It could be thirty, sixty, or one hundred.

Jesus wants to point out the way so that God’s words can bear fruit in one’s life. First, they have to prepare their mind before listening and learning God’s words. When their minds were not ready, they could not understand what they heard. Next, they must spent time to meditate God’s words days and nights in order to find ways to put God’s words into practice. Last, God’s words demand them to sacrifice and to give up worldly standards in order to follow divine standards. If they do that, they can bear plenty of fruits in this life and the life to come.

– We must live according to what we professed our faith in God and Jesus Christ. Do not profess in one thing and do other thing. If we proclaimed Christ as our king and Lord, we cannot let anyone or anything to substitute for his place in our soul.

– As Christians, we must love God’s words above all and always find out ways to practice them. If we despite God’s words, we will not know how to live. If we are content with knowing God’s words, they will not benefit anything for our life.