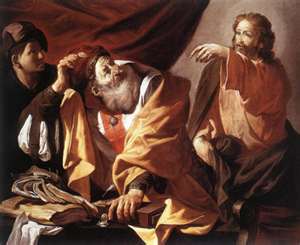 There was a stalwart man from Benjamin named Kish,
who was the son of Abiel, son of Zeror,
son of Becorath, son of Aphiah, a Benjaminite.
He had a son named Saul, who was a handsome young man.
There was no other child of Israel more handsome than Saul;
he stood head and shoulders above the people.

When Samuel caught sight of Saul, the LORD assured him,
“This is the man of whom I told you; he is to govern my people.”

Saul met Samuel in the gateway and said,
“Please tell me where the seer lives.”
Samuel answered Saul: “I am the seer.
Go up ahead of me to the high place and eat with me today.
In the morning, before dismissing you,
I will tell you whatever you wish.”

Then, from a flask he had with him, Samuel poured oil on Saul’s head;
he also kissed him, saying:
“The LORD anoints you commander over his heritage.
You are to govern the LORD’s people Israel,
and to save them from the grasp of their enemies roundabout.

“This will be the sign for you
that the LORD has anointed you commander over his heritage.”

Jesus went out along the sea.
All the crowd came to him and he taught them.
As he passed by, he saw Levi, son of Alphaeus,
sitting at the customs post.
Jesus said to him, “Follow me.”
And he got up and followed Jesus.
While he was at table in his house,
many tax collectors and sinners sat with Jesus and his disciples;
for there were many who followed him.
Some scribes who were Pharisees saw that Jesus was eating with sinners
and tax collectors and said to his disciples,
“Why does he eat with tax collectors and sinners?”
Jesus heard this and said to them,
“Those who are well do not need a physician, but the sick do.
I did not come to call the righteous but sinners.”

I. THEME: The effect of God’s words

According to Jewish tradition, when a word comes out of people’s mouth, it can be independently existed. It isn’t only a meaningful sound, but also has power to complete the intention of the one who spoke it. For example, many great works were resulted from the commands of kings and great people in the world. This is all the more true for God’s words. The prophet Isaiah had this to say about the effects of God’s words: “For as the rain and the snow come down from heaven, and return not thither but water the earth, making it bring forth and sprout, giving seed to the sower and bread to the eater, so shall my word be that goes forth from my mouth; it shall not return to me empty, but it shall accomplish that which I purpose, and prosper in the thing for which I sent it” (Isa 55:10-11).

Today readings concentrate on the importance of God’s words. In the first reading, God chose Saul to be the first king of Israel. He arranged all things so that the prophet Samuel could anoint Saul to be a king. In the Gospel, Jesus’ words had the power to attract Matthew, a tax-collector, so that he immediately left his past and career to become the apostle and the evangelist of Jesus.

1/ Reading I: The Lord has anointed you to be a prince over his heritage.

1.1/ God selected Saul to be the first king of Israel: God’s way of choosing people to do His task is very different with human way. People has a tendency to choose their leader from a big and important tribe, God chose Saul from Benjamin, the smallest of the twelve tribes of Israel. When replacing Saul with David, God did the same, He didn’t choose the older and healthy sons of Jesse; but David who was the youngest and the shepherd.

1.2/ Samuel anointed Saul to be a king: When Samuel saw Saul, the Lord told him, “Here is the man of whom I spoke to you! He it is who shall rule over my people.”Then Saul approached Samuel in the gate, and said, “Tell me where is the house of the seer?” Samuel answered Saul, “I am the seer; go up before me to the high place, for today you shall eat with me, and in the morning I will let you go and will tell you all that is on your mind.”

Next morning, Samuel took a vial of oil and poured it on his head, and kissed him and said, “Has not the Lord anointed you to be prince over his people Israel? And you shall reign over the people of the Lord and you will save them from the hand of their enemies round about. And this shall be the sign to you that the Lord has anointed you to be prince over his heritage.” Samuel also let Saul know that his father had found the lost asses.

Through God’s wonderful providence, all were arranged by Him, from the selection to the anointing. Saul didn’t know and had no intention to be a king. When God chooses someone to do His will, He plans all things so that His will shall be fulfilled.

2/ Gospel: “I came not to call the righteous, but sinners.”

2.1/ Jesus calls Levi, the tax-collector: When Jesus passed on, he saw Levi the son of Alphaeus sitting at the tax office, and he said to him, “Follow me.” And he rose and followed him.

The Jews considered tax-collectors as Levi as public sinners because they conspired with foreigners to exploit their own people. These tax-collectors were prohibited to enter the Temple, and classified as prostitutes and robbers. Jesus not only chose Matthew as his apostle but also had dinner with other tax-collectors at Matthew’s house.

Matthew’s reaction was very courageous and once for all, because when he decided to quit his job, he lost his financial support. In compensation, he gained many spiritual blessings, such as: peace because he shall not be looked down by the Jews anymore, becoming one of Jesus’ apostles, be an evangelist to announce the Good News for generations to come.

2.2/ The conflict between Jesus and the Pharisees: There were two main reactions in Matthew’s conversion.

(1) The scribes of the Pharisees’ reactions: When they saw that he was eating with sinners and tax collectors, they said to Jesus’ disciples, “Why does he eat with tax collectors and sinners?” They were partially correct when they condemned Jesus because as one of the proverb says, “Evil communications corrupt good manner.” But this concept can’t be applied to Jesus, because he came to conquer and to bring all people back to God.

(2) Jesus corrected them: When Jesus heard it, he said to them, “Those who are well have no need of a physician, but those who are sick; I came not to call the righteous, but sinners.”

In opposition to human reaction, God doesn’t want to confine people in their past, He continually calls people to give up their sinful past to look up to glorious future. As a skillful doctor, Jesus knew he can heal Matthew and use his book-keeping talent to write down the Good News for evanlization.

– God’s words can help people to achieve the impossible thing. We should never underestimate the power of God’s words.

– We must pay a special attention for God’s words in our life through overcoming all obstacles to have time to learn Scripture and to apply them into our life.