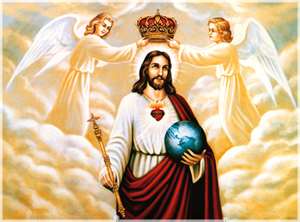 Thus says the Lord GOD:
I myself will look after and tend my sheep.
As a shepherd tends his flock
when he finds himself among his scattered sheep,
so will I tend my sheep.
I will rescue them from every place where they were scattered
when it was cloudy and dark.
I myself will pasture my sheep;
I myself will give them rest, says the Lord GOD.
The lost I will seek out,
the strayed I will bring back,
the injured I will bind up,
the sick I will heal,
but the sleek and the strong I will destroy,
shepherding them rightly.

As for you, my sheep, says the Lord GOD,
I will judge between one sheep and another,
between rams and goats.

Brothers and sisters:
Christ has been raised from the dead,
the firstfruits of those who have fallen asleep.
For since death came through man,
the resurrection of the dead came also through man.
For just as in Adam all die,
so too in Christ shall all be brought to life,
but each one in proper order:
Christ the firstfruits;
then, at his coming, those who belong to Christ;
then comes the end,
when he hands over the kingdom to his God and Father,
when he has destroyed every sovereignty
and every authority and power.
For he must reign until he has put all his enemies under his feet.
The last enemy to be destroyed is death.
When everything is subjected to him,
then the Son himself will also be subjected
to the one who subjected everything to him,
so that God may be all in all.

I. THEME: Jesus Christ, be a king to govern us.

(1) Kings and worldly leaders are imperfect human beings. The majority of them are unjust and worried about themselves; they used people’s trust to build their own kingdom.

(2) Worldly powers are constantly changed, from one kingdom to another, from one empire to another. When people found a good leader who loved and cared for people, such one was assassinated or died young.

(3) People are mixed: good and bad, wolves and sheeps; therefore, it is very hard to govern them.

To the Christians, a paradise can only be found in the next world where all three above conditions will be achieved.

(1) The only true king is Christ: He will be victorious over all, and all worldly leaders must obey him. He will gather all things for God. He will govern people in their heart and by truth, peace and love.

(2) His kingdom is the heaven which will be lasted for ever.

(3) His people: will be all the righteous; all the wicked will be casted out. They will never die. The condition to belong to his kingdom is to believe in him.

Today readings center on these three basic elements: Christ the King, heavenly kingdom, and his own people. In the first reading, the prophet Ezekiel foretold the day Christ will come to search out his people and what will happen on that day. The second reading centered on Christ, his victory over all enemies and conquering his kingdom. In the Gospel, Matthew reported the Last Judgment Day when Christ will separate sheeps from goats. The standard he will use to judge people is the charity, and he will reward or punish people depending on what they have done to others.

1/ Reading I: Christ is the king of love.

1.1/ The Lord himself will care for his sheeps: No one loves and cares for sheeps more than their owner; no one loves and cares for people more than their Creator who creates His people. The prophet Ezekiel forsaw and predicted the day when the Lord himself will care for His own flock: “For thus says the Lord GOD: Behold, I, I myself will search for my sheep, and will seek them out.As a shepherd seeks out his flock when some of his sheep have been scattered abroad, so will I seek out my sheep; and I will rescue them from all places where they have been scattered on a day of clouds and thick darkness.I myself will be the shepherd of my sheep, and I will make them lie down, says the Lord GOD.”

(1) Whoever is lost, I will search for him. For example, the parable of the prodigal son.

(2) Whoever is strayed, I will lead him back. Jesus becomes friends with tax-collectors and prostitutes.

(3) Whoever is injured, I will bind him up. Jesus establishes the sacrament of Reconciliation for healing.

(4) Whoever is sick, I will make him well. Jesus heals all kinds of people’s diseases.

(5) Whoever is fat and healthy, I will watch over. I will feed them in justice.Jesus leads people in the right way.

2.1/ Christ has power over death. St. Paul used two images of the first man, Adam, and the new man, Christ, to show that people will be resurrected. Since Adam, the first man sinned, so sins are spreaded to all their children (the original sin); and the result of sin is death. People must be dead not only because of the original sin, but also of their own sins. But when Christ, the Son of God, incarnated, he is free from sin so death has no power on him. Not just that, Christ also destroyed death by his Passion, Death and Resurrection. St. Paul confirmed this faith: “For as by a man came death, by a man has come also the resurrection of the dead.For as in Adam all die, so also in Christ shall all be made alive.” The first one who went first to open the way is Christ; after that, it is those who belong to him. St. Paul called Christ’s resurrection is “the first fruit,” since there must be the first fruit before a harvest results from it. If there isn’t the first fruit, there aren’t a harvest and following fruits.

2.2/ Christ has power over the three enemies: There exist many powers that dominate people in this world. To completely set people free, Christ must destroy all these powers. St. Paul wrote: “Then comes the end, when he delivers the kingdom to God the Father after destroying every rule and every authority and power.For he must reign until he has put all his enemies under his feet.” The translation of PVCGK didn’t help to understand the meaning of this verse than the Greek text; they translated “rule” as the ruler, “authority” as the domination, and “power” as the power, as in the nine ranks of angels. To understand the author’s intention, the best way to explain is according to the concept of the three enemies who always threaten the Christian life.

(1) The Devil: were Satan and his companions. With Christ’s victory, they could no longer dominate people as the words of the Book of Revelation: “Now the salvation and the power and the kingdom of our God and the authority of his Christ have come, for the accuser of our brethren has been thrown down, who accuses them day and night before our God” (Rev 12:10).

(2) The world: Many earthly kings and rulers of all times and places always issued decrees to oppose Catholicism and Christians due to their way of living according to the truth and to the kingdom of heaven’s standards. But Christ has conquered the world, and the martyrs who followed Christ, also had strength to overcome kings and rulers’ threatened words and deeds.

(3) The power of the flesh and bad tendencies in human mind: The world with all of their temptations, such as money, power, fame, and fleshy pleasure always are dangerous threats to Christians. These temptations can be overcome when people let Christ completely govern their mind and heart. The lives of the saints are powerful examples for Christ’s power.

3/ Gospel: Christ is the most wise king.

Matthew opened the Last Judgment Day with these words: “When the Son of man comes in his glory, and all the angels with him, then he will sit on his glorious throne.Before him will be gathered all the nations, and he will separate them one from another as a shepherd separates the sheep from the goats,and he will place the sheep at his right hand, but the goats at the left.”

3.1/ The judgment of sheeps on the right side: The standard used to judge them is charity.

(1) Christ’s judgment and the reward: “Come, O blessed of my Father, inherit the kingdom prepared for you from the foundation of the world;for I was hungry and you gave me food, I was thirsty and you gave me drink, I was a stranger and you welcomed me,I was naked and you clothed me, I was sick and you visited me, I was in prison and you came to me.”

(3) Christ’s revelation: “Truly, I say to you, as you did it to one of the least of these my brethren, you did it to me.” Nothing pleases parents more than when they see others help their children when they are in need. Similarly, all people are God’s children, and He is happy when He sees His children are loved and cared for.

3.2/ The judgment of goats on the left side: The standard used to judge them is charity.

(2) The wicked’s answer: “Lord, when did we see thee hungry or thirsty or a stranger or naked or sick or in prison, and did not minister to thee?”

– We recognized the fakeness of “the earthly paradise:” the leaders’ imperfection; the passing shadow of worldly kingdoms; and the mix of both the righteous and the wicked. We also recognized Christ’s perfection: He is the king of love, power, wisdom; the kingdom of heaven will last for ever; and its citizen will be prosperous, happy and peaceful. Let us ask Christ to be our king and to govern us for ever.

– If we want to be Christ’s citizens, we must have the same love as he has; if not, we will be eliminated and cast out.

– Christ the king and the kingdom of heaven are not the products of imagination as atheists and Communists declare. The concrete proof is the Christians tasted the sweetness of the king of love when they are still living in this world. The Christians have shown they know how to live according to their ultimate goal and to love all people.