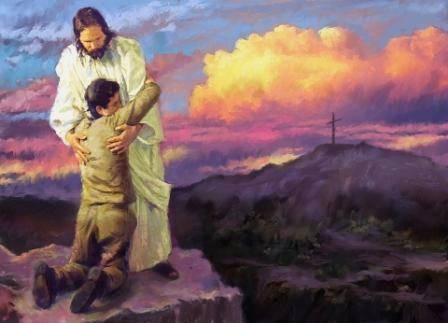 Reading 1 (Rom 14:7-12): Brothers and sisters:
None of us lives for oneself, and no one dies for oneself.
For if we live, we live for the Lord,
and if we die, we die for the Lord;
so then, whether we live or die, we are the Lord’s.
For this is why Christ died and came to life,
that he might be Lord of both the dead and the living.
Why then do you judge your brother or sister?
Or you, why do you look down on your brother or sister?
For we shall all stand before the judgment seat of God;
for it is written:

As I live, says the Lord, every knee shall bend before me,
and every tongue shall give praise to God.
So then each of us shall give an account of himself to God.

The tax collectors and sinners were all drawing near to listen to Jesus,
but the Pharisees and scribes began to complain, saying,
“This man welcomes sinners and eats with them.”
So Jesus addressed this parable to them.
“What man among you having a hundred sheep and losing one of them
would not leave the ninety-nine in the desert
and go after the lost one until he finds it?
And when he does find it,
he sets it on his shoulders with great joy
and, upon his arrival home,
he calls together his friends and neighbors and says to them,
“Rejoice with me because I have found my lost sheep.”
I tell you, in just the same way
there will be more joy in heaven over one sinner who repents
than over ninety-nine righteous people
who have no need of repentance.

“Or what woman having ten coins and losing one
would not light a lamp and sweep the house,
searching carefully until she finds it?
And when she does find it,
she calls together her friends and neighbors
and says to them,
“Rejoice with me because I have found the coin that I lost.”
In just the same way, I tell you,
there will be rejoicing among the angels of God
over one sinner who repents.”

Many people think they could independently live and rely on nobody. If they carefully think, they will see they can never do that. They cannot live without others and it is impossible for them to live without God. In God’s providence and His plan of salvation, everybody have a duty to help others and to work for the salvation of all.

Today readings orient people’s heart to help and to build up, instead of to judge, to criticize and to condemn each other. In the first reading, St. Paul called people’s attention to their role and mission in God’s plan of salvation, because “none of us lives to himself, and none of us dies to himself.If we live, we live to the Lord, and if we die, we die to the Lord; so then, whether we live or whether we die, we are the Lord’s.” In the Gospel, some scribes and Pharisees criticized Jesus when he let tax collectors and sinners to listen to him and ate with them. Jesus clearly declared his intention: He came to call sinners and the heavenly hosts will joyfully celebrate because one of sinners repented.

1/ Reading I: Each of us shall give account of himself to God.

1.1/ If we live, we live to the Lord; and if we die, we die to the Lord: The reason why St. Paul could say this verse was his concept of Christ’s Mystical Body. Each Christian, when was baptized, became a member of one Body which is the Church, with Christ is the head. If a member cannot be separated from a living body, a Christian cannot be separated from Christ’s Body. He can say that he doesn’t want to be in that Body; but it is not due to his intention that he is not belonged to it. If he realized his presence in Christ’ Body, he will try to build up His Body by improving himself and other members so that the whole Body will be healthy.

Since Christ had died and risen, he would no longer die again; so is a Christian. Though he will die in body, his body will be gloriously resurrected on the Last Day. Therefore, St. Paul could say these verses to the Romans: “None of us lives to himself, and none of us dies to himself.If we live, we live to the Lord, and if we die, we die to the Lord; so then, whether we live or whether we die, we are the Lord’s.For to this end Christ died and lived again, that he might be Lord both of the dead and of the living.”

1.2/ We should not judge others, but ourselves: If all are members of one Body, a member cannot esteem himself as the most important member so that he can criticize and judge other members. All members rely on each others to live together and to make the Body healthy and strong. Therefore, it is useless for a Christian to criticize and to judge others; it is better if he would use the time of criticizing others for judging himself, to find out what he can do to enlarge God’s kingdom and to make other members better. Moreover, the one who has a duty to judge is Christ, not our duty; he will judge and return to everyone according to the works they did on the Last Judgment Day.

2/ Gospel: There will be more joy in heaven over one sinner who repents than over ninety-nine righteous persons who need no repentance.

(1) Others: They believed tax collectors and prostitutes are public sinners who will never be allowed to mix with the righteous and to be in God’s kingdom.

(2) Jesus: They murmured: “This man receives sinners and eats with them.” To them, when Jesus had contacted these people, he made himself unclean. They had a reason to think as such because there is a Vietnamese proverb for teaching children: “near ink will be dark near light will be enlighten.” This concept, however, is true only for children or weak people; it is not true for Jesus and those who have a duty to educate others. Their mission is to change sinners and to strengthen the weak.

In other passages, Jesus blamed them for their hypocrisy: “Woe to you, scribes and Pharisees, hypocrites! for you are like whitewashed tombs, which outwardly appear beautiful, but within they are full of dead men’s bones and all uncleanness. So you also outwardly appear righteous to men, but within you are full of hypocrisy and iniquity” (Mt 23:27). They should clean themselves before they can judge others. In today report, Jesus would like to orient them to God’s mercy and compassion for sinners.

(1) One lost sheep: The sheep which was lost is its fault because it did not follow the shepherd. The owner did not pay attention to its fault, but to search for it. He searched because it belonged to him, even he still had 99 other sheep. When he found it, he did not condemned nor scourged, but joyfully embraced it on his shoulder and organized a banquet. Same thing happened to Jesus, he came to look for lost sheep and to bring them into one herd, so that there would be one herd and one shepherd. Sinners are also God’s children, their souls are valuable to Him because He created them, and His Son’s blood has been poured out to redeem them.

(2) One lost coin: The coin was lost due to the woman’s mishap. Many people felt to sins because of unlucky situations in life or of their weakness. The woman lighted up a lamb to search for it because it belonged to her, even she still had other nine coins. When she found it, she also celebrated with a banquet! Some people said: “She probably spent all nine coins to prepare for a banquet!” A parable paid attention only to one main point, other possible points might occur but it is not the author’s attention. Both parables were ended up with Jesus’ conclusion: “Just so, I tell you, there will be more joy in heaven over one sinner who repents than over ninety-nine righteous persons who need no repentance.”

– We must frequently examine our conscience to recognize that we all are sinners before God. This will help us to avoid judging, criticizing and condemning others.

– God loves sinners and is always ready to look for them. We must also forgive and help others to return to God.

– Since God loved and forgave all our sins, we have no right to condemn others as the scribes and the Pharisees; but to find a way to bring others back to God.