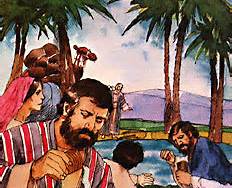 Brothers and sisters:
As a body is one though it has many parts,
and all the parts of the body, though many, are one body,
so also, Christ.
For in one Spirit we were all baptized into one Body,
whether Jews or Greeks, slaves or free persons,
and we were all given to drink of one Spirit.

Now the body is not a single part, but many.

Now you are Christ’s Body, and individually parts of it.
Some people God has designated in the Church
to be, first, Apostles; second, prophets; third, teachers;
then, mighty deeds.
then gifts of healing, assistance, administration,
and varieties of tongues.
Are all Apostles? Are all prophets? Are all teachers?
Do all work mighty deeds? Do all have gifts of healing?
Do all speak in tongues? Do all interpret?
Strive eagerly for the greatest spiritual gifts.

Jesus journeyed to a city called Nain,
and his disciples and a large crowd accompanied him.
As he drew near to the gate of the city,
a man who had died was being carried out,
the only son of his mother, and she was a widow.
A large crowd from the city was with her.
When the Lord saw her,
he was moved with pity for her and said to her,
“Do not weep.”
He stepped forward and touched the coffin;
at this the bearers halted,
and he said, “Young man, I tell you, arise!”
The dead man sat up and began to speak,
and Jesus gave him to his mother.
Fear seized them all, and they glorified God, exclaiming,
“A great prophet has arisen in our midst,”
and “God has visited his people.”
This report about him spread through the whole of Judea
and in all the surrounding region.

I. THEME: Unity in diversity

Many people think that perfect unity is impossible because people have so many differences with each other. However, they must try because they are predestined to live with others. The Catholic Church lately emphasized very much on this topic through the Ecumenical movements by which she pays special attention to what different religions have the same instead of the difference. She hopes that by doing this, all religions shall build up an unity which is enough to help people to live and to help each other.

Today reading emphasize what people have together and their different missions. In the first reading, St. Paul built up his theology of the Body which is based on Christ’s Body in which everybody are different parts. This theology should help the faithful to live in unity. Moreover, as each part of the body has a different function, each one of us also has a different mission, but to build up one Christ’s body. In the Gospel, Jesus had compassion for the Nain’s mother who lost her only son. Through this event, we must realize that love should be the uniform of all people no matter of their differences in language, nation, class, etc.

1/ Reading I: St. Paul’s theology of the body

We will see that St. Paul applied his theology of the Body in many areas; for examples, the question of eating meat which was sacrificed to idols. St. Paul answered that one should eat without any question; but if the eating might cause a brother to lose his faith, he shall not eat it because this brother has been redeemed by Christ’s blood. Or yesterday, when talking about the “agape” banquet, he said: all those who eat bread and drink wine – eat Christ’s body and drink his blood – became one body and participate in Christ’s divine life, because of his blood. Therefore, all must eat and drink in a way that they shouldn’t eat their punishment by the separation between the rich and the poor.

1.2/ Many different ministries but are given by the same Holy Spirit: Another of his application is in today passage. According to him, each faithful is given a different mission: “Some people God has designated in the church to be, first, apostles; second, prophets; third, teachers; then, mighty deeds; then, gifts of healing, assistance, administration, and varieties of tongues.” All different missions aim at one purpose, that is, to build up Christ’s mystical body.

People have tendency to have a high regard for their mission and to denigrate others’ mission. They think that only their mission is important and necessary, and others’ mission is less important or not necessary. St. Paul used the image of the body to discard this bad habit. He said that all members of a body are important in keeping a body healthy. The eyes can’t say to the hand, “I don’t need you.” The head can’t say to the feet, “I don’t need you.” Moreover, all the missions are given by the same Holy Spirit who not only knows each one’s ability but also the need of Christ’s mystical body, so that he arranges different missions and gives necessary grace to each so he can fulfill his duty.

Another tendency is wishing to do what is considered as important according to worldly standards; for example, the tendency to speaking in tongues in Corinth’s community. In the Gospel, there was no lacking people who had this tendency; for example, the mother of James and John asked Jesus to let her two sons to seat one in the right and one in the left in his kingdom. Jesus corrected them, “You know that those who are recognized as rulers over the Gentiles lord it over them, and their great ones make their authority over them felt. But it shall not be so among you. Rather, whoever wishes to be great among you will be your servant.” (Mk 10:42-43).

2/ Gospel: Jesus had compassion for the Nain’s mother and resurrected her only son.

2.1/ Confronting the death, especially the death of a young person, a sudden death, or the dead of many people, man feel helpless and frightened.  Like the case of the mother in Nain village, she is a widow and has only a son. He is her hope to support her during the old age of her life in the world, but he is death now. She might never expect such a tragedy can happen to her! She certainly thought that he will be the one to bury her, not her to bury him!

The Greeks, especially those who are Stoics, believe in God; but they don’t believe He has compassion for people’s pain and suffering. They reason: If people can make God happy or sad, that means people have an influence over Him; when people have an influence over God, people is greater or mightier than God. But no one is greater than the Almighty God; therefore, God must have no compassion for people.

2.2/ God have compassion for people: Stoic’s faith is contrary to Catholic faith; we have a God who has compassion for people because Jesus had endured all pain and suffering as a human being. St. Luke reports Jesus has compassion for the Nain mother who lost her only son. He consoled her: “Do not weep.” He raised the man by touching the coffin and gave him back to her. In the Fourth Gospel, the author also reported “Jesus wept” (Jn 11:35), and “He deeply moved within” (Jn 11:38) before He raised Lazarus up from death.

– The image of different members of the same body shall help us to solve many problems in our life, such as: the greed for power, jealousy, taking sides and expelling each other. Every one of us has a standing in God’s house and the Holy Spirit gives us a mission to build up this house.

– God has power both on life and death. He concerns about human sufferings. These things must provide hope for our life because we know that sufferings are meaningful, and death is only temporal. If we patiently overcome sufferings, we shall be resurrected and enjoyed God’s glory.