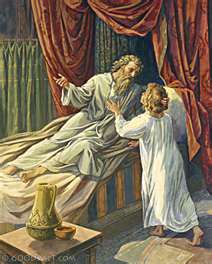 During the time young Samuel was minister to the LORD under Eli,
a revelation of the LORD was uncommon and vision infrequent.
One day Eli was asleep in his usual place.
His eyes had lately grown so weak that he could not see.
The lamp of God was not yet extinguished,
and Samuel was sleeping in the temple of the LORD
where the ark of God was.
The LORD called to Samuel, who answered, “Here I am.”

Samuel ran to Eli and said, “Here I am. You called me.”
“I did not call you,” Eli said. “Go back to sleep.”
So he went back to sleep.
Again the LORD called Samuel, who rose and went to Eli.
“Here I am,” he said. “You called me.”
But Eli answered, “I did not call you, my son. Go back to sleep.”
At that time Samuel was not familiar with the LORD,
because the LORD had not revealed anything to him as yet.
The LORD called Samuel again, for the third time.
Getting up and going to Eli, he said, “Here I am.
You called me.”
Then Eli understood that the LORD was calling the youth.
So Eli said to Samuel, “Go to sleep, and if you are called, reply,
‘Speak, LORD, for your servant is listening.'”
When Samuel went to sleep in his place,
the LORD came and revealed his presence,
calling out as before, “Samuel, Samuel!”
Samuel answered, “Speak, for your servant is listening.”

Samuel grew up, and the LORD was with him,
not permitting any word of his to be without effect.
Thus all Israel from Dan to Beersheba
came to know that Samuel was an accredited prophet of the LORD.

On leaving the synagogue
Jesus entered the house of Simon and Andrew with James and John.
Simon’s mother-in-law lay sick with a fever.
They immediately told him about her.
He approached, grasped her hand, and helped her up.
Then the fever left her and she waited on them.

When it was evening, after sunset,
they brought to him all who were ill or possessed by demons.
The whole town was gathered at the door.
He cured many who were sick with various diseases,
and he drove out many demons,
not permitting them to speak because they knew him.

Rising very early before dawn,
he left and went off to a deserted place, where he prayed.
Simon and those who were with him pursued him
and on finding him said, “Everyone is looking for you.”
He told them, “Let us go on to the nearby villages
that I may preach there also.
For this purpose have I come.”
So he went into their synagogues, preaching and driving out demons
throughout the whole of Galilee.

I. THEME: Balancing between our prayer life and apostolic work

Today readings show us how we must balance our prayer life and apostolic work. In the first reading, the high priest Eli used his experience to teach the child Samuel how to listen and to respond to God’s voice in the night. In the Gospel, Mark presented us a typical day of Jesus: he taught in the synagogue and healed all kinds of sickness during the day and he woke up early in the morning to unite with God in prayer. He also taught his disciples to balance between their prayer life and apostolic works.

1.1/ The necessary virtues of a prophet: In order to listen to God’s voice, one needs to be trained to have the following virtues:

(1) Silence: The church is one of places God talks to human beings. Samuel slept in the temple at Shiloh. Beside, the top of a mountain or a desert are also places where people can encounter God. If one has no opportunity to come to these places, one’s room can also be a place for prayer. In opposition, noisy or public places divide one’s attention and his mind can’t be settled to listen to God.

(2) Consciousness: Jesus advised his disciples to always be conscious and pray in order to stand firm and to avoid temptation. The child Samuel in today passage was very sensitive to God’s call, three times he woke up during the night and ran to Eli because he thought his master called him. Many saints had a habit of praying during the night because it is the time God reveals Himself to men. A prophet must have time to think and to recognize others’ needs before he can respond to their needs. Those who spend so much time to sleep are difficult to recognize God’s and others’ voices.

(3) Obedience: Three times when Samuel heard someone called him, he woke up and ran to Eli; three times Eli told him to go back to sleep. If Samuel discouraged after the first or the second time, he might not have the opportunity to encounter God. A prophet listens not only to God’s voice, he must also obey and do His will. God wants to test Samuel before He gives him the prophetic mission. How can God give the prophetic mission to those who are insensitive to His call and don’t do what He commands?

1.2/ Eli used his experience to help Samuel: People need to listen not only to God’s voice but also to others’ experience, because God uses them to train people. If one is so prideful of oneself and refuses to learn from others, that one shall pay a heavy price. In today passage, Eli used his experience to teach Samuel so that he can listen to God’s voice: “Go, lie down; and if He calls you, you shall say, `Speak, LORD, for thy servant hears.'” So Samuel went and lay down in his place.And the LORD came and stood forth, calling as at other times, “Samuel! Samuel!” And Samuel said, “Speak, for thy servant hears.”

From that time on, Samuel grew in his relationship with God, and the Lord was with him and let none of his words fall to the ground.And all Israel from Dan to Beersheba knew that Samuel was established as a prophet of the Lord.

2/ Gospel: Jesus had compassion on men. He healed them from all kinds of sickness.

2.1/ Jesus healed Peter’s mother-in-law: Jesus spent his time in the synagogue at Capernaum to teach people. After that, he entered the house of Simon and Andrew, with James and John.They let him know Simon’s mother-in-law lay sick with a fever, Jesus came to her bed and took her by the hand and lifted her up, and the fever left her. She immediately stood up and prepared a meal for Jesus and his disciples.

During Jesus’ journey on earth, he always had compassion to people, especially to the sick and the sinners. He healed them when they asked for, and many times even they didn’t ask.

2.2/ Jesus healed many sick peoples in the city: Mark continued to report: “That evening, at sundown, they brought to him all who were sick or possessed with demons.And the whole city was gathered together about the door.And he healed many who were sick with various diseases, and cast out many demons; and he would not permit the demons to speak, because they knew him.” Why did they have to wait for the sun to come down? According to the law of Sabbath, one can’t heal or be healed on the Sabbath; and the Sabbath day begins on 6 PM of Friday untill 6 PM of Saturday. Jesus didn’t refuse to heal anyone.

2.3/ Jesus spent his early time with his Father: Mark continued: “And in the morning, a great while before day, he rose and went out to a lonely place, and there he prayed.”

(1) The necessary of the prayer life: After a hectic life full of teaching and healing, Jesus must be very tired. He probably spent some time to eat and to sleep; but woke up early and came to a lonely place to unite with God in prayer. He wanted to teach us that no matter how busy we are during the day with apostolic works, we must spend time in prayer to unite ourselves to God. The prayer time is needed to strengthen ourselves and to nourish the apostolic works. Without the prayer life, we don’t have strength to do apostolic works. Without God’s love, we can’t love people and meet all challenges of apostolic life.

(2) God’s kingdom needs to be expanded everywhere: When Jesus was still praying, “Simon and those who were with him pursued Jesus,and they found him and said to him, “Every one is searching for you.”But he said to them, “Let us go on to the next towns, that I may preach there also; for that is why I came out.”And he went throughout all Galilee, preaching in their synagogues and casting out demons.

– A disciple of Jesus must have compassion with people’s weakness, diseases, suffering and sins before he can help and show them the way to God.

– We must know how to balance between our prayer life and apostolic works. We can’t choose one and neglect the other.

– In order to hear God’s voice, we need to have a quiet place to pray and to avoid worldly attraction.