Home » Feast of Our Lady of Guadalupe 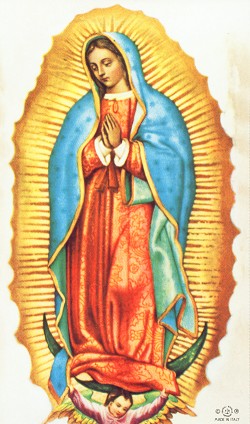 Sing and rejoice, O daughter Zion!
See, I am coming to dwell among you, says the LORD.
Many nations shall join themselves to the LORD on that day,
and they shall be his people,
and he will dwell among you,
and you shall know that the LORD of hosts has sent me to you.
The LORD will possess Judah as his portion in the holy land,
and he will again choose Jerusalem.
Silence, all mankind, in the presence of the LORD!
For he stirs forth from his holy dwelling.

The angel Gabriel was sent from God
to a town of Galilee called Nazareth,
to a virgin betrothed to a man named Joseph,
of the house of David,
and the virgin’s name was Mary.
And coming to her, he said,
“Hail, full of grace! The Lord is with you.”
But she was greatly troubled at what was said
and pondered what sort of greeting this might be.
Then the angel said to her,
“Do not be afraid, Mary,
for you have found favor with God.
Behold, you will conceive in your womb and bear a son,
and you shall name him Jesus.
He will be great and will be called Son of the Most High,
and the Lord God will give him the throne of David his father,
and he will rule over the house of Jacob forever,
and of his Kingdom there will be no end.”
But Mary said to the angel,
“How can this be,
since I have no relations with a man?”
And the angel said to her in reply,
“The Holy Spirit will come upon you,
and the power of the Most High will overshadow you.
Therefore the child to be born
will be called holy, the Son of God.
And behold, Elizabeth, your relative,
has also conceived a son in her old age,
and this is the sixth month for her who was called barren;
for nothing will be impossible for God.”
Mary said, “Behold, I am the handmaid of the Lord.
May it be done to me according to your word.”
Then the angel departed from her.

I. THEME: To love the truth

Today readings center on to know and to live according to the truth. In the first reading, king Balak, though has been told the truth by the prophet Balaam, still hoped for what shall be in opposition to the truth. He wanted God to curse the Israelites. In the Gospel, the high priests and the elders, even they knew John’s baptism and Jesus’ power are from heaven, they were still not confessed that and lied, because they were afraid that if they confess, they must keep what Jesus taught.

1/ Reading I: The prophet Balaam, though he is a Gentile prophet, spoke the truth.

When Balak, the Moab’s king, sees the Israel’s power was spreading over all regions of Transjodan, he is afraid that the Israelites shall also conquer Moab. The king sent his messenger to the prophet Balaam who was living in the area so that he shall curse the Israelites. The king hoped that with the prophet’s curse, he shall win over the Israel when they fight. The prophet Balaam was permitted to come to the king; but he could only be spoken what God wants him to

(Num 22:20, 35, 38). After two times the king had failed to find God’s curse from Balaam’s mouth, he was still patient with the prophet and waiting for him to change.

Today passage described what the prophet Balaam told king Balak on the third time: “The oracle of Balaam the son of Beor, the oracle of the man whose eye is opened, the oracle of him who hears the words of God, who sees the vision of the Almighty, falling down, but having his eyes uncovered.” The first part of his vision talked about God’s blessing for the Israelites, the second part mentioned what shall happen to king Moab and his people.

(1) God blessed the house of Israel: “How fair are your tents, O Jacob, your encampments, O Israel! Like valleys that stretch afar, like gardens beside a river, like aloes that the Lord has planted, like cedar trees beside the waters. Water shall flow from his buckets, and his seed shall be in many waters, his king shall be higher than Agag, and his kingdom shall be exalted.”

(2) Moab shall be destroyed by Israel: And he took up his discourse, and said, “The oracle of Balaam the son of Beor, the oracle of the man whose eye is opened, the oracle of him who hears the words of God, and knows the knowledge of the Most High, who sees the vision of the Almighty, falling down, but having his eyes uncovered: I see him, but not now; I behold him, but not nigh: a star shall come forth out of Jacob, and a scepter shall rise out of Israel; it shall crush the forehead of Moab, and break down all the sons of Sheth.”

Many of the Church’s fathers believed “a star shall come forth out of Jacob” as the prophecy about the Messiah; but this prophecy was not quoted in the New Testament. However, it was quoted in Qumran books (1QM 11:5-7, CD 7:19-20) to indicate people’s hope in the Messiah.

2/ Gospel: The high priests and the elders were afraid to answer Jesus’ question because they were afraid the result of the truth.

2.1/ Facing the truth: When Jesus entered the Temple, the chief priests and the elders of the people came up to him as he was teaching, and said, “By what authority are you doing these things, and who gave you this authority?”

(1) They challeged Jesus’ authority to purify the Temple: What they were angry at was the event in which Jesus came to the Temple and chased out all vendors out of there (cf. Mt 21:12-13) and Jesus’ healing of the sick (Mt 21:14-15). The reason why Jesus did that, he already spoke out in chasing them: “It is written, `My house shall be called a house of prayer’; but you make it a den of robbers.”

(2) Jesus challenged them about John Baptist’s baptism: He didn’t directly answer their question, instead Jesus demanded them to provide him the answer for his question before he gave them his answer to their question. His question is: “I also will ask you a question; and if you tell me the answer, then I also will tell you by what authority I do these things. The baptism of John, whence was it? From heaven or from men?”

2.2/ Their attitude of avoiding the truth: Jesus knew well what they were thinking. If they sincerely looked for the truth, they must confess that John’s baptism and Jesus’ authority came from God. John Baptist prepared for people to welcome the Messiah, and all people flocked to him to be prepared. Jesus’ purification of the Temple and his miracles couldn’t come from human since none had courage and authority to do such thing.

– “But if we say, `From men,’ we are afraid of the multitude; for all hold that John was a prophet.”

(2) They refused to believe in the truth: They were lying when they said to Jesus: “We do not know.” And he said to them, “Neither will I tell you by what authority I do these things.” To the lying, the truth has no effect on their life.

– We must love the truth because only the truth can set us free and help us to reach our ultimate goal of life.

– We must desire and look for the truth. Once we possess the truth, we must live according to the truth demands.

– We must have courage to stand for the truth. The fear causes people to turn their back to the truth and deny it.