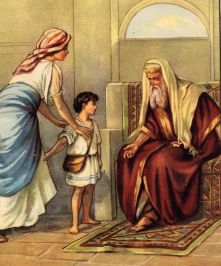 All the elders of Israel came in a body to Samuel at Ramah
and said to him, “Now that you are old,
and your sons do not follow your example,
appoint a king over us, as other nations have, to judge us.”

Samuel was displeased when they asked for a king to judge them.
He prayed to the LORD, however, who said in answer:
“Grant the people’s every request.
It is not you they reject, they are rejecting me as their king.”

Samuel delivered the message of the LORD in full
to those who were asking him for a king.
He told them:
“The rights of the king who will rule you will be as follows:
He will take your sons and assign them to his chariots and horses,
and they will run before his chariot.
He will also appoint from among them his commanders of groups
of a thousand and of a hundred soldiers.
He will set them to do his plowing and his harvesting,
and to make his implements of war and the equipment of his chariots.
He will use your daughters as ointment makers, as cooks, and as bakers.
He will take the best of your fields, vineyards, and olive groves,
and give them to his officials.
He will tithe your crops and your vineyards,
and give the revenue to his eunuchs and his slaves.
He will take your male and female servants,
as well as your best oxen and your asses,
and use them to do his work.
He will tithe your flocks and you yourselves will become his slaves.
When this takes place,
you will complain against the king whom you have chosen,
but on that day the LORD will not answer you.”

The people, however, refused to listen to Samuel’s warning and said,
“Not so! There must be a king over us.
We too must be like other nations,
with a king to rule us and to lead us in warfare
and fight our battles.”
When Samuel had listened to all the people had to say,
he repeated it to the LORD, who then said to him,
“Grant their request and appoint a king to rule them.”

When Jesus returned to Capernaum after some days,
it became known that he was at home.
Many gathered together so that there was no longer room for them,
not even around the door,
and he preached the word to them.
They came bringing to him a paralytic carried by four men.
Unable to get near Jesus because of the crowd,
they opened up the roof above him.
After they had broken through,
they let down the mat on which the paralytic was lying.
When Jesus saw their faith, he said to him,
“Child, your sins are forgiven.”
Now some of the scribes were sitting there asking themselves,
“Why does this man speak that way? He is blaspheming.
Who but God alone can forgive sins?”
Jesus immediately knew in his mind what
they were thinking to themselves,
so he said, “Why are you thinking such things in your hearts?
Which is easier, to say to the paralytic,
‘Your sins are forgiven,’
or to say, ‘Rise, pick up your mat and walk’?
But that you may know
that the Son of Man has authority to forgive sins on earth”
-he said to the paralytic,
“I say to you, rise, pick up your mat, and go home.”
He rose, picked up his mat at once,
and went away in the sight of everyone.
They were all astounded
and glorified God, saying, “We have never seen anything like this.”

I. THEME: People need to listen, to understand and to practice God’s word.

God always teaches and guides people in everything that happen in this world; but not many people want to listen, to understand and to practice His words. Therefore, it is not a surprise to see people continue to suffer because of their sins.

Today readings highlight the need to listen and to respond to God’s will. In the first reading, the Israelites asked the prophet Samuel for a king as other nations, to reign over them because they had lost their trust in him, and they no longer wanted to listen to God’s teaching through him. In the Gospel, Jesus used divine power to heal and to forgive sins in order to prove that he came from God.

1/ Reading I: “Hearken to their voice, and make them a king.”

1.1/ People didn’t understand what they asked for: The imagination, “The grass is always greener in the other side of the hill,” is always in human mind. People never satisfy with what they are having; but always looking, searching and demanding for more. The result is they shall never have peace and happiness. Today passage is an example.

(1) People no longer wanted to listen to Samuel, God’s prophet: All the elders of Israel gathered together and came to Samuel at Ramah,and said to him, “Behold, you are old and your sons do not walk in your ways; now appoint for us a king to govern us like all the nations.”

(2) People didn’t want God to reign over them: Samuel displeased with what they said, “Give us a king to govern us.” And Samuel prayed to the LORD. And the LORD said to Samuel, “Hearken to the voice of the people in all that they say to you; for they have not rejected you, but they have rejected me from being king over them.”

1.2/ People must endure results of what they asked for.

(1) God warned people about the results they’re going to suffer: People weren’t wise to foresee what shall be results of having a king to govern them; therefore, God told Samuel to let them know about these results: “These will be the ways of the king who will reign over you: he will take your sons and appoint them to his chariots and to be his horsemen, and to run before his chariots; and he will appoint for himself commanders of thousands and commanders of fifties, and some to plow his ground and to reap his harvest, and to make his implements of war and the equipment of his chariots. He will take your daughters to be perfumers and cooks and bakers. He will take the best of your fields and vineyards and olive orchards and give them to his servants. He will take the tenth of your grain and of your vineyards and give it to his officers and to his servants. He will take your menservants and maidservants, and the best of your cattle and your asses, and put them to his work. He will take the tenth of your flocks, and you shall be his slaves. And in that day you will cry out because of your king, whom you have chosen for yourselves; but the LORD will not answer you in that day.”

(2) People accepted all the results: If people are wise, they shall recognize to ask for a king is foolish due to the following reasons: First, How can people find for them a leader who is wiser than God? Secondly, people and their children are free when God governs them; but they shall become as slaves under a king. Thirdly, they must pay all kinds of taxes for all the king’s needs. Lastly, if later they recognize it is bad to have a king and ask God to withdraw their petition, God won’t listen to them.

But people won’t retract their desire and listen to Samuel, they persisted: “No! but we will have a king over us, that we also may be like all the nations, and that our king may govern us and go out before us and fight our battles.” And when Samuel had heard all the words of the people, he repeated them in the ears of the LORD. And the LORD said to Samuel, “Hearken to their voice, and make them a king.””

2/ Gospel: Jesus is God because he performed God’s works.

2.1/ Jesus has power to heal the sick: St. Mark reported the healing as follows: “When Jesus returned to Capernaum after some days, it was reported that he was at home. And many were gathered together, so that there was no longer room for them, not even about the door; and he was preaching the word to them. And they came, bringing to him a paralytic carried by four men. And when they could not get near him because of the crowd, they removed the roof above him; and when they had made an opening, they let down the pallet on which the paralytic lay.”

The roof of a Jewish house doesn’t decrease from the top to two sides; but has a rectangular form so people can go up to enjoy a fresh air. Therefore, the removing of the roof is a simple task and causes a little damage. Seeing their way of expressing faith, Jesus said to the paralyzed: “My son, your sins are forgiven.” The sin can be the sin of removing the roof or the paralytic’s sins.

2.2/ Jesus has power to forgive sins.

(1) Sin and punishment: According to Jewish tradition, disease is a result from sin; it can be from the sin of parents or the sick (cf. Job 4:7, Jn 9:2). The Rabbi have a saying: “No one can be healed until all of his sins are forgiven.”

(4) Jesus used the scribes’ argument and the healing to prove to them that he is God: “And immediately Jesus, perceiving in his spirit that they thus questioned within themselves, said to them, “Why do you question thus in your hearts? Which is easier, to say to the paralytic, `Your sins are forgiven,’ or to say, `Rise, take up your pallet and walk’?” Of course, it is easier to say: “Your sins are forgiven,” because no one can verify that. The more difficult is to say: “Rise, take up your pallet and walk,” because everyone can verify if the commander has power to do it or not.

“But that you may know that the Son of man has authority on earth to forgive sins” — he said to the paralytic — “I say to you, rise, take up your pallet and go home.” And he rose, and immediately took up the pallet and went out before them all; so that they were all amazed and glorified God, saying, “We never saw anything like this!”

– To listen to the priest’s homily is to help our faith to grow, is not just to fulfill our duty for attending Mass. Both the preacher and the faithful must value the homily.

– If the preacher doesn’t carefully prepare for his homily, he wasted his and the faithful’s time; especially he doesn’t help his faithful to know God’s teaching and to do His will to reach the eternal life.