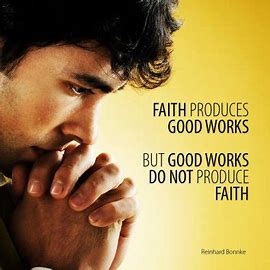 1/ First Reading (Dt 11:18, 26-28): 18 I will raise up for them a prophet like you from among their kindred and will put my words into the mouth of the prophet; the prophet shall tell them all that I command. 19 Anyone who will not listen to my words which the prophet speaks in my name, I myself will hold accountable for it. 20 But if a prophet presumes to speak a word in my name that I have not commanded, or speaks in the name of other gods, that prophet shall die.

21 Should you say to yourselves, “How can we recognize that a word is one the Lord has not spoken?” 22 If a prophet speaks in the name of the Lord but the word does not come true, it is a word the Lord did not speak. The prophet has spoken it presumptuously; do not fear him.

2/ Second Reading (Rom 3:21-25a, 28): 21 But now the righteousness of God has been manifested apart from the law, though testified to by the law and the prophets, 22 the righteousness of God through faith in Jesus Christ for all who believe. For there is no distinction; 23 all have sinned and are deprived of the glory of God. 24 They are justified freely by his grace through the redemption in Christ Jesus, 25 whom God set forth as an expiation, through faith, by his blood, to prove his righteousness because of the forgiveness of sins previously committed, 28 For we consider that a person is justified by faith apart from works of the law.

I. THEME: Faith must be expressed through action.

St. Paul’s Letter to the Romans is the Letter causing many controversies in the Scripture scholars, especially when Luther and Calvin commented on this Letter. According to them, people are saved because of their faith in Christ, not by their good works. Such understanding caused crises in the Catholic Church, many denominations were arisen and separated them from the Church. They taught that if one wants to go to heaven, he only needs to have faith in Christ in his heart. He doesn’t need to keep the laws, to attend Masses, to receive sacraments, to fasting or to do good works. Many innocent people have followed them. This movement is not strange because people’s general tendency does not want to be constrained by the laws or disturbed by worships; but can this be true religion?

First of all, we need to recognize that even they explained the Letter to the Romans correctly, this Letter is only one of the 73 Books in the Canon which a Catholic must believe. There are so many other Books emphasize on faith and good works, especially Christ’s teaching in Matthew’s Gospel today. Secondly, they didn’t correctly understand Paul’s intention in His Letter to the Romans. He indeed says this thing; but to explain Christ’s principal and necessary role in God’s Salvation Plan. Paul never said that the good works to express one’s faith are not necessary. If he believed as such, he shall never be preoccupied with his advises to the faithful that they must do good and avoid evil, live according to the Spirit not to the flesh, and give a list of many sins which anyone commits them, shall not inherit the kingdom of God. Lastly, according to our experience, we must accept this Vietnamese adage, “words must be accompanied with actions or words and actions must be one” in order for a person to be successful. The Jewish tradition also does not separate knowledge from action. They believe that if a person believes and loves God, he shall keep God’s teachings.

Today readings emphasize the importance of both faith and work, though the second reading pays more attention to the role of faith. In the first reading, the author of Deuteronomy firstly commanded the Israelites to take into heart God’s command which is to love Him above all things, and secondly, they must carefully practice what God’s commands in order to be blessed and protected by Him. If not, they shall be punished by God. The second reading pays a special attention to the role of faith. This is his important theology which he wants his faithful to understand, because there existed many Jews of his day believed that they could attain salvation by their good works without believing in Christ. St. Paul denied their belief and affirmed that if Christ did not pour out His blood, no one can attain salvation, because everyone sinned, the Jews and the Gentiles. In the Gospel, Jesus teaches His disciples that the necessary condition for one to enter the kingdom of God: not only to worship by mouth; but by doing God’s will which is to practice what God teaches.

1/ First Reading: You shall be blessed if you obey God’s commandments.

1.1/ Take to your heart God’s words: Verse 18 of today passage from Deuteronomy is one of the Shema which the Jews have a habit to put it in a small box and binding around their arms, putting in their forehead, nailing in their doorpost or the city’s gate. The other verse is Deuteronomy 6:5, “You shall love the Lord, your God, with your whole heart, and with your whole being, and with your whole strength.” This is also the first and important commandment more than any other commandments. The reason why they must do as such is to remind them never to forget what God has taught.

As said above, the Jews don’t separate “knowledge” from “action” as the Greeks. They believe if one knows God, he must also keep what God teaches. That is their tradition; but if they can’t do them, it is due to their human weakness.

1.2/ To be blessed or cursed depends on to keep or to omit what God has commanded: This is the commandment with blessing or cursing, not only let people have freedom to do or to omit. Of course, people have freedom to choose; but if they choose, they must get results of their choosing. In other place, Moses said it more seriously: to choose between life and death, life for keeping God’s teaching and death for violating it. In today passage, the author also lists out the two results:

(2) To be cursed: “Anyone who will not listen to my words which the prophet speaks in my name, I myself will hold accountable for it. 20 But if a prophet presumes to speak a word in my name that I have not commanded, or speaks in the name of other gods, that prophet shall die.”

2.1/ Faith is the principal condition for people to become righteous: To clearly understand what Paul said, we need to understand the historical background when he said these things; especially the problem of circumcision in Jerusalem community. There were Jewish faithful in Jerusalem believed that the Gentiles faithful must be circumcised like the Jews to attain salvation, because that is the condition to become God’s people as signed by Abraham.

St. Paul strongly opposed circumcision for the Gentiles. His reason is that all faithful become righteous due to their faith in Christ, not by keeping of the laws. He said: “21 But now the righteousness of God has been manifested apart from the law, though testified to by the law and the prophets, 22 the righteousness of God through faith in Jesus Christ for all who believe.” He explained more in the Letter to Romans and Galatians as follows:

– Abraham became righteous because he put his faith completely in God; not by his keeping of the laws, nor by his willing to kill Isaac. Moreover, Moses’ laws (the Ten Commandments) only exist after Abraham’s death about 300 years!

2.2/ People can’t become righteous by their works: The main argument in Paul’s reason is to show people the laws’ ineffectiveness: “All commit sins and God’s glory is taken away.” Paul wanted to say that: No one, from the beginning until now, can keep perfectly all the laws; and according to what Moses commanded they only need to commit one serious sin, they are no longer righteous and must die. Since no one can become righteous by keeping the laws, so God must have another plan to save people. He gives them Jesus Christ, His Only Son, to die for people; and He commands people to believe in Him to become righteous.

Christ helps people to become righteous by pouring out His blood to wash away people’s sins and to reconcile them with God. Moreover, becoming righteous is God’s work, not by human effort. Even the faith, which people use to believe in God and Christ, is also God’s gift. Jesus revealed this many times: “No one can come to me unless the Father who sent me draw him, and I will raise him on the last day” (Jn 6:44, x/c Jn 6:37). St. Paul also affirmed this when he said: “Therefore, I tell you that nobody speaking by the spirit of God says, “Jesus be accursed.” And no one can say, “Jesus is Lord,” except by the holy Spirit” (1 Cor 12:3b). However, the condition to become righteous is to believe in Christ. In history, there are many sects believed that they can become righteous by strictly keeping the laws, fasting, ascetism, and doing good works as Pharisees, Sadducees, Pelagians, Semi-Pelagians…

3/ Gospel: Only those who do My Father’s will shall enter the kingdom of heaven.

3.1/ Knowing God is not enough: Jesus clearly declares: “Not everyone who says to me, ‘Lord, Lord,’ will enter the kingdom of heaven, but only the one who does the will of my Father in heaven.” Love is an abstract concept, but the expression of love is so practical. The wise only needs to observe a person’s act, he knows if that person truly loves him. To God, the only way people can show if they really love Him is to do His will. Love by words is not enough to show the true love; sometimes it irritates the one who must listen to deceiving words. One thing people need to know is that God penetrates all thoughts in people’s mind, they can’t deceive God. They can’t say loving words to enter the kingdom of God.

3.2/ People must do God’s will to enter the heaven: God wants us to obey Him, is not to glorify Him; but to bring good profit for us. Our mind is very limited in knowing the truth and are also surrounded by falsity of the world and the devil. Since God out of love doesn’t want us to fall into their traps and being separated from Him, so God, reveals to us wonderful resolutions through Christ, the Holy Spirit and His prophets.

(1) The reward for those who do God’s will: If people apply God’s words in their daily life, their life shall be firmed as people build their house on the stony foundation, not any suffering can shake their faith in God. Stones used to build the spiritual house are faith, virtues, and God’s words.

– We should never listen to those who said: “One only needs to believe God in his heart is enough to enter heaven” or “People can be saved without Christ.” Faith without works is dead (Jam 2:26).

– Faith must be expressed by worshipping God, doing His will, and helping others spiritually and physically.

– God’s words have power to change one’s life. If we did not apply them into our life, we should begin right away before it is too late, and we must endure all suffering and unfortunate that shall happen in our life.