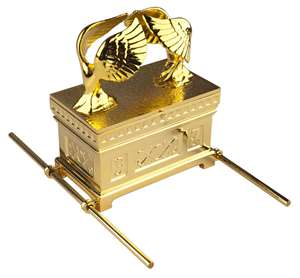 The Philistines gathered for an attack on Israel.
Israel went out to engage them in battle and camped at Ebenezer,
while the Philistines camped at Aphek.
The Philistines then drew up in battle formation against Israel.
After a fierce struggle Israel was defeated by the Philistines,
who slew about four thousand men on the battlefield.
When the troops retired to the camp, the elders of Israel said,
“Why has the LORD permitted us to be defeated today
by the Philistines?
Let us fetch the ark of the LORD from Shiloh
that it may go into battle among us
and save us from the grasp of our enemies.”

So the people sent to Shiloh and brought from there
the ark of the LORD of hosts, who is enthroned upon the cherubim.
The two sons of Eli, Hophni and Phinehas, were with the ark of God.
When the ark of the LORD arrived in the camp,
all Israel shouted so loudly that the earth resounded.
The Philistines, hearing the noise of shouting, asked,
“What can this loud shouting in the camp of the Hebrews mean?”
On learning that the ark of the LORD had come into the camp,
the Philistines were frightened.
They said, “Gods have come to their camp.”
They said also, “Woe to us! This has never happened before. Woe to us!
Who can deliver us from the power of these mighty gods?
These are the gods that struck the Egyptians
with various plagues and with pestilence.
Take courage and be manly, Philistines;
otherwise you will become slaves to the Hebrews,
as they were your slaves.
So fight manfully!”
The Philistines fought and Israel was defeated;
every man fled to his own tent.
It was a disastrous defeat,
in which Israel lost thirty thousand foot soldiers.
The ark of God was captured,
and Eli’s two sons, Hophni and Phinehas, were among the dead.

A leper came to him and kneeling down begged him and said,
“If you wish, you can make me clean.”
Moved with pity, he stretched out his hand,
touched the leper, and said to him,
“I do will it. Be made clean.”
The leprosy left him immediately, and he was made clean.
Then, warning him sternly, he dismissed him at once.
Then he said to him, “See that you tell no one anything,
but go, show yourself to the priest
and offer for your cleansing what Moses prescribed;
that will be proof for them.”
The man went away and began to publicize the whole matter.
He spread the report abroad
so that it was impossible for Jesus to enter a town openly.
He remained outside in deserted places,
and people kept coming to him from everywhere.

I. THEME: To disobey God is to receive bad results.

In reality, we know that if we want to have good results, we must follow the instruction or meet the requirements. To do against the instruction or to lack of the requirements certainly lead us to bad results. For examples, if a patient wants to be healed, he must follow his doctor’s instruction; if he doesn’t, he shall not be healed. If a student wants to have knowledge and a high grade, he must listen to his teacher and do what he is required; if he doesn’t, he shall not have knowledge nor a good grade.

Today readings concentrate on people must obey God and do what He commands, if they want God to bless and to protect them. To disobey God and to do against His commandment shall surely cause them to have bad results. In the first reading, the Israelites thought if they bring the ark to the battlefield, even God doesn’t command them to do so, they shall receive the victory. The results of their disobedient act were they lost the battle and the ark were seized by the Philistines. In the Gospel, after Jesus healed the leper, he commanded him to be quiet and to present himself to a priest. He disobeyed Jesus and freely talked about his healing. The result was Jesus could no longer openly enter a town, but was out in the country; and people came to him from every quarter.

1/ Reading I: Why has the LORD put us to rout today before the Philistines?

1.1/ Can people reveive God’s forgiveness without repentance? In the Old Testament, we can see this pattern: when people obeyed God and followed His commands, they were blessed and protected by God from their enemies; but when they disobeyed God and followed their own way, God shall no longer bless them and He let their enemies to attack them from all directions. When God did that, they failed and endured all bad results. Today passage is an example: Eli’s sons, Hophni and Phinehas, and many peoples of the Israelites disobeyed God more and more. The results were they lost their battle with the Philistines’ armies and about four thousands Israel’s soldiers were killed.

(2) Philistines’ reaction: When the Philistines heard the noise of the shouting, they said, “What does this great shouting in the camp of the Hebrews mean?” And when they learned that the ark of the Lord had come to the camp, the Philistines were afraid; for they said, “A god has come into the camp.” They said to one another: “Woe to us! For nothing like this has happened before. Woe to us! Who can deliver us from the power of these mighty gods? These are the gods who smote the Egyptians with every sort of plague in the wilderness.”

1.2/ The result of the battle: “So the Philistines fought, and Israel was defeated, and they fled, every man to his home; and there was a very great slaughter, for there fell of Israel thirty thousand foot soldiers. And the ark of God was captured; and the two sons of Eli, Hophni and Phinehas, were slain.”

The Israelites learned their lesson: They were not automatically victorious when they had the ark with them; but they must obey God and do His will in order to be blessed and protected by Him.

2/ Gospel: The leper was healed but he disobeyed Jesus’ command.

2.1/ Jesus healed the leper: There was a leper who came to him beseeching him, and kneeling said to him, “If you will, you can make me clean.” Jesus was moved with pity, he stretched out his hand and touched him, and said to him, “I will; be clean.” And immediately the leprosy left him, and he was made clean.

2.2/ Jesus’ command: “And he sternly charged him, and sent him away at once,and said to him, “See that you say nothing to any one; but go, show yourself to the priest, and offer for your cleansing what Moses commanded, for a proof to the people.”

The reasons why Jesus healed him were because he had compassion on him and he wanted him to obey his command, not to be praised by people. If after the leper received his healing and disobeyed Jesus’ command, that miracle didn’t help the leper’s faith.

2.3/ The leper’s disobedience: “But he went out and began to talk freely about it, and to spread the news, so that Jesus could no longer openly enter a town, but was out in the country; and people came to him from every quarter.”

We can imagine what shall happen to this leper if Jesus is a king or a military leader, he probably shall not have his second chance!

– Our duties are to completely trust in God and to keep His commandments.

– To obey God, Christ and those who succeeded him isn’t weak nor slavery; but to show our wisdom, because we know they are wiser than us and love us.