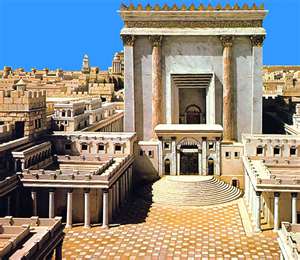 On the first day of the sixth month in the second year of King Darius,
The word of the LORD came through the prophet Haggai to the governor of Judah, Zerubbabel, son of Shealtiel, and to the high priest Joshua, son of Jehozadak:

Thus says the LORD of hosts:
This people says:
“The time has not yet come to rebuild the house of the LORD.”
(Then this word of the LORD came through Haggai, the prophet:)
Is it time for you to dwell in your own paneled houses,
while this house lies in ruins?

Now thus says the LORD of hosts:
Consider your ways!
You have sown much, but have brought in little;
you have eaten, but have not been satisfied;
You have drunk, but have not been exhilarated;
have clothed yourselves, but not been warmed;
And whoever earned wages
earned them for a bag with holes in it.

Thus says the LORD of hosts:
Consider your ways!
Go up into the hill country;
bring timber, and build the house
That I may take pleasure in it
and receive my glory, says the LORD.

Herod the tetrarch heard about all that was happening,
and he was greatly perplexed because some were saying,
“John has been raised from the dead;
others were saying, “Elijah has appeared;
still others, “One of the ancient prophets has arisen.”
But Herod said, “John I beheaded.
Who then is this about whom I hear such things?”
And he kept trying to see him.

I. THEME: We must spend time to learn and to practice important truth.

Today readings emphasize what people need to do first because they are more important. In the first reading, the prophet Haggai reminded the Israelites that the most important thing they have to do is to rebuild the Temple, so that they have a place to worship and to learn about God; not to build their houses and to find security for their family. They need to reflect and to remember the reason that caused them to be on Exile, that was, they turned their backs to God and worshipped foreign gods. If they don’t think carefully and act wisely, they will do the same thing as their ancestors, and the exile will happen one more time. In the Gospel, God gave king Herod the first chance to know the truth from John the Baptist; the king did not take the opportunity, he beheaded John the baptist. God gave him the second chance to learn from Jesus who is the truth, he is curious to know about Jesus; but at the end, he did not listen and protect the truth, but gave the order to kill Jesus.

1/ Reading I: Go up into the hill country; bring timber, and build the God’s house.

1.1/ Two opposite reactions about the rebuilding of the Temple.

(1) Those who are for the rebuiding: The first one is God. He changed the minds of Persian kings so that they released the Israelites in order for them to go back and to rebuild the Temple. When the Israelites were so indifferent about rebuiding the Temple, God also used the prophet Haggai to reveal His will to them: “Is it time for you to dwell in your own paneled houses, while this house lies in ruins?”

(2) Those who are against it: The usual tendency of a majority of the Israelites when they came back to their country is to establish their life and family. They don’t think it is the right time to rebuild the Temple when they are not settled down yet.

(1) What is the most important thing in life: God and all spiritual leaders always remind us the most important thing in life is our duty “to love God above all, with our whole mind, heart, and body.” We can memorize this well; but not many of us put this into practice in our life. We always put ourselves, families, rights, and material gains before God. The results are we become slaves for material things and evils. When the Israelites were released and came back, they were still like their ancestors, become slaves for material things and forgot about God. If they don’t change their lifestyle and live according to God’s way, exile and sufferings will certainly happen again.

(2) Successes are not only from human efforts: The prophet Haggai invites people to hear the words of the Lord of Sabaoth say to people: “You have sown much, but have brought in little; you have eaten, but have not been satisfied; You have drunk, but have not been exhilarated; have clothed yourselves, but not been warmed; and whoever earned wages earned them for a bag with holes in it.”

Why did people try as hard as possible, wake up early and stay up late to work, and still have not enough to eat, to drink, and to be warm? The simple reason is because they followed human wisdom, and not God’s wisdom. The author of Psalm 127:2 compares the case of one who knows how to live according to God’s wisdom and one who lives according to human wisdom as follows: “It is in vain that you rise up early and go late to rest, eating the bread of anxious toil; for he gives to his beloved sleep.” They worked hard, but if they don’t know how to use their money, they will not have enough, as the prophet Haggai says, “whoever earned wages earned them for a bag with holes in it.”

(3) God is the one who bestows gifts on people: Haggai counsels people that they must first do God’s will. When God delights, He will bless people. In today reading, He wants the Israelites, “Go up into the hill country; bring timber, and build the house that I may take pleasure in it and receive my glory.”

2/ Gospel: Know how to seize opportunities to learn the truth.

2.1/ The king Herode confused about Jesus’ identity: Some said to him: “That is John who has been raised from the death.” Some said “The prophet Elijah has appeared.” Some still said “It is one of former prophets has been raised up.” The king himself says, “John I beheaded. Who then is this about whom I hear such things?” And he kept trying to see him.

When people have power, many think they have power to determine everything, make wrong to become right, and destroy those who dare to oppose them. In the case of Herod, when John declared that “the king cannot take your brother’s wife!” he put John in prison. While drunken with guests on his birthday’s party, he gave the order to behead John and put on the plate and brought it to Salome, his daughter. And she brought it to her mother.

2.2/ King Herode tried to find a way to meet Jesus: Today report is Herode’s second chance to learn about Jesus, and God gave him an opportunity to meet Jesus in his Passion. When Pilate knows Jesus is a Galilean and subjected to Herode’s territory, Pilate handed Jesus to Herode for investigation because he is in Jerusalem at that time. Herode learned nothing from Jesus. The only thing he wanted is to see Jesus performing miracles. When Jesus refused to do it, he mocked Jesus (Lk 23:7-11). The second chance past, Herode is still in his arrogance.

– We must know how to organize and to do what is the most important in life; do not busy ourselves with little things that cannot bring benefits for our life.

– Above all, we need to learn the truth from God and to worship Him over all others. To walk in God’s way guarantees us a peaceful and happy life.